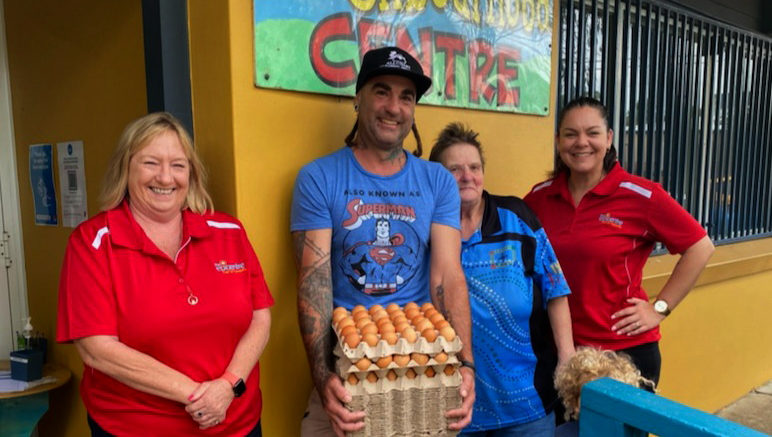 Coast Hands has started its February off with an exquisite donation.

The Central Coast based outreach organisation started the month with one of its largest and most unusual donations ever, 1000 eggs.

It’s exciting stuff to organisation founder, Micah Weekes, who’s since delivered them to partner organisations around the region.

“It’s not everyday someone tells you they want to donate 1000 eggs, so at first I thought it was a joke, but after chatting with the donor it was clear they were legit, so I was stoked to accept and have dozens of eggs to distribute to families in need,” Weekes said.

After a quick call for donations of egg cartons, to which the community generously responded within three hours, Weekes was ready to deliver the eggs, with 200 each to go to the Neighbourhood Centres at San Remo, Toukley and Wyong, and the remainder to Cooranbong’s Southlake Incorporated foodbank.

And while it may seem a trifling donation to some, to Weekes, who’s seen how deep need runs on the Coast, the eggs were a true gift.

“With pandemic financial support winding down, we’re actually seeing more need now than we did at the height of COVID-19 last year.

“More and more people are falling into income stress and struggling to put food on the table, so that’s why donations like this are so worthwhile.

“They don’t happen that often, but they’re just these fantastic little boosts that make us all laugh and smile,” Weekes said.

With the eggs now helping feed families doing it tough, Weekes is confident the generous donation will kick off a big year of giving.

“One thing I know to be certain about the Central Coast is that we’re a fantastic community when it comes to giving.

“Locals really get behind their own and whenever we put a call out for something they always deliver.

“We see that with all the community groups and local businesses that we work with.

“People all over the Coast just want to give.

“They want to help and that really inspires me,” Weekes said.