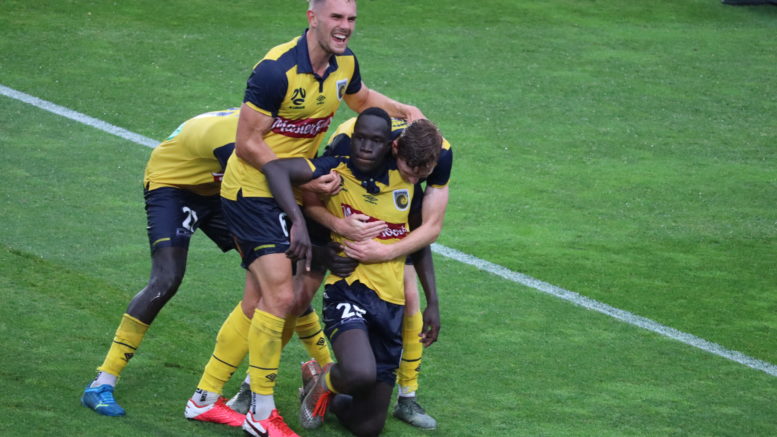 A second come-back win in a row for the Mariners at Central Coast Stadium against Western United has given the side a slither of first place security. The brunt of the home side damage was done by Mariner, Alou Kuol, who came on in the second half and scored two goals.

Still buzzing off their Wednesday night win over Melbourne City, the Mariners faced an altogether new challenge, facing a team standing in fourth place who won this previous encounter by a whopping 6-2. Perhaps due to this shuddering past encounter, the Mariners faltered early on in their tight passing play of this season with a number of failed attempts, immediatey putting them on the back foot.

Western United were quick to capitalise with a set piece goal in the 4th minute going to Tomilsave Uskok. The free-kick came in from captain, Alessandro Diamanti, meeting the head of Uskok, who thumped the ball back across Mariners keeper, Mark Birighitti, hitting the side post on its way in. The Mariners were again playing catch up and were faced with an effective high press defensive strategy that continued to undermine their consistency in passing.

The game then turned on its head with its second set-piece goal, this time going to the Mariners off a corner, put away by captain Matt Simon. The initial header from Marcos Ureńa hit the bottom corner of the post and ricocheted back into play. Simon was the first to respond with a powerful, low strike at point blank range which, despite a deflection, had too much pace to be altered from its path to goal.

This not only evened the score board, but also the contest for possession, with the Mariners adjusting better to the high pressure from Western United off the ball. Space began to open up in Western’s defensive half, exploited at times by a long pass in behind, but lacking an end challenge for keeper, Filip Kurto.

In the 42nd minute, Western United scored their second goal through Mariners bane, Besart Berisha. Western’s Tomoki Imai gave a willful chase after a long, lobbed through ball, catching out both Clisby and Rowles, and in doing, pulled the later of these out of position and the box. Imai’s first touch cross landed at the feet of Berisha, who pivoted in a flash to get his body facing goal, leaving Tongyik in his wake. A fast strike snapped the ball upward above Birighitti’s outstretched arms, earning the A-League veteran his 21st goal against Mariners in 24 games.

The pressure mounted against the Mariners up to the end of the first half, where just before, Tongyik earned the Mariners their first yellow card of the night, giving Berisha another golden chance in front of goal. The free-kick cross into the box again landed at the feet of Berisha, who met the ball first time on the volley but wasn’t able to keep it from fanning over the crossbar. Nonetheless, the Mariners went into half time after a first half performance that left a number of notable holes in front of goal appearing on the end of wide balls, two of which ended in conceded goals.

The Mariners’ second half search for goals brought a number of good opportunities in the first 30 minutes yet without any scoreboard success. This led up to the Mariners scoring tan equaliser in the 78th minute, again off a corner, adding goal number four to Alou Kuol’s 2021 tally. De Silva’s inward curling cross swung out to the far side of goal, finding Kuol unmarked in space. The super sub, with his late game energy, made the most of it, launching the ball back across Kurto and nestling it in the back of the net.

In the final ten minutes of regular time, both teams went looking for the winning goal. In this final chase, it was the home side who again showed their character, again off the head of Kuol from a wide cross. Australian Under 23 player, Dylan Pierias cut out a pass along the side line at half way and found Daniel Bouman making the run ahead of him. With time to look up, Bouman curled the ball in to the forward surging Kuol, who launched himself forward, meeting the ball with a diving header to catch out the inside channel of Kurto.

The intensity in the remaining minutes continued to rise, with the away side rising to challenge the Mariners’ newfound control over the match. The Mariners defence were pulled into risky tackles to stamper their opponents, giving away an unsettling amount of free-kicks. However, the boys in yellow were able to hold on to the final whistle. For Kuol, his two goals has shot him back up to the top of the goal scoring tally with five, a placement he now shares with Brisbane Roar’s Dylan Wenzel-Halls. For the Mariners, a well-earned week-long break, after three games in eight days, will be followed by a fierce match against Wellington Phoenix, who beat the lads a week ago.