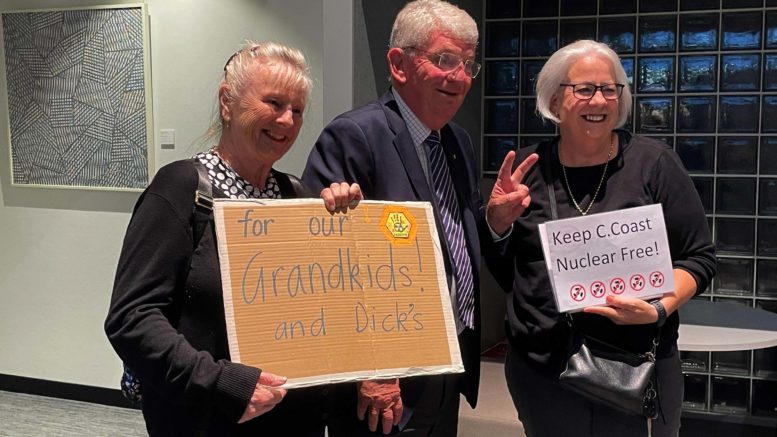 Administrator Dick Persson rejected a Central Coast Council staff report which wanted to revoke the policy, amid applause from the public gallery, at the Council meeting on February 8.

Only about a dozen members of the public attended the meeting but at least two of them carried home-made anti-nuclear signs.

Another two people spoke at the public forum in favour of keeping the policy in place.

To the surprise of the gallery, when the speakers concluded, Persson said he agreed with everything they had said and the gallery burst into applause.

Persson suggested someone had been working through a list of policies that needed removing and that at the last meeting he had dealt with some.

The staff recommended it be revoked due to the handling and mining of radioactive materials being highly regulated by Federal and State laws.

Persson said there was a lot of debate and interest in the community about nuclear power and he agreed with resident concerns about revoking the policy.

“I am very comfortable in saying no to revoking the policy and that Council will continue to have a Nuclear Free Policy,” he said.

The policy was introduced to the former Gosford Council area in 1984.

The former Wyong Council area had a similar policy which was revoked in 2014.

Various nuclear-related activities are prohibited on the Coast except those in direct association with hospital, medical facilities and in any measuring device.

In a report to the Administrator, staff had recommended that public consultation on the issue was costly and unnecessary.

“Any public concern regarding nuclear-related activities is best dealt at the State and Federal level,’’ the report said.

But Persson called it a silly proposal and won over the gallery.

This was in stark contrast to the last Council meeting on February 3, which saw residents protesting a proposed rate rise in front of the Gosford Chambers and a gallery as packed as it could be in light of COVID-safe rules.

No protesters turned up on February 8.

The Wyong public gallery had room left over for a handful of latecomers who had not realised they needed to book a seat.

Even then, there were still plenty of spaces left over.

Persson expressed his surprise that nobody had registered to speak about the proposed rate rise.