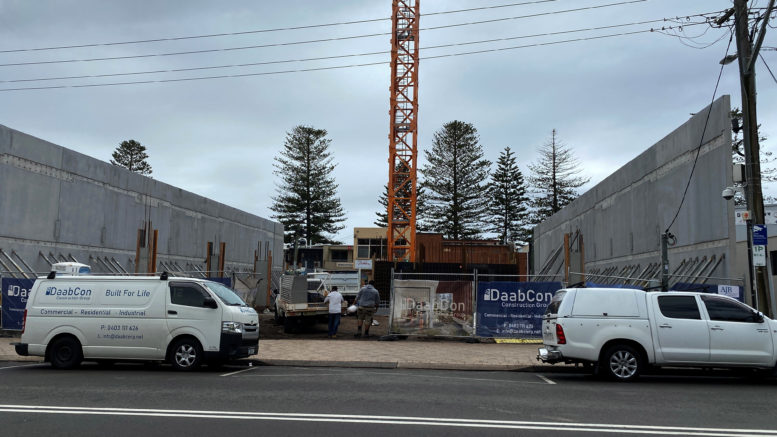 The development at 5-7 Church St is already under construction

Terrigal residents have three more days to submit objections to a proposed increase in height for a unit block currently rising from the old car park between Church St and Hudson Lane.

With more than 35 submissions already sent in to Central Coast Council, residents are urging others not to be complacent but to add to the weight of numbers.

They are hoping more people will show their opposition to the development, which many believe should never have been approved in the first place – let alone another storey being allowed.

The developer, who has already started work on the site at 5-7 Church St, has asked Council to approve a sixth storey and for permission to enlarge terraces of the approved level five residential units.

Town planners have submitted objections on behalf of some residents, saying the amendment cannot be considered substantially the same development as that originally approved as a sixth storey is not a minor amendment.

The approved development already was higher than the guidelines for the area.

Other submissions are suggesting that since an administrator has been appointed at Council because of dysfunction, the existing approval should be revisited and investigated to confirm compliance with appropriate procedures and processes.

“What is happening to the seaside village atmosphere?” asked a resident when Coast News met with objectors from Miller Rd this week.

“Once you change the fabric of the town like this, you’re sitting in shade and wind tunnels.

“We are supposed to be a seaside village and we’re becoming like Bondi.”

Another said the development is completely contrary to Council’s previously stated intent, and the community’s understanding, of the construction limits that apply in the Terrigal central commercial block bounded by The Esplanade, Kurrawyba Ave, Church St and Campbell Cres.

“All other developments in that block have been limited to a maximum of three levels above ground level,” said resident Greg Berrington.

“This development is two floors above the previously established maximum and if approved would create a precedent for all future construction in that block.”

Others talked about the lack of parking and the strain on infrastructure.

Terrigal Lagoon was recently closed to swimmers due to sewage leaks.

One submission to the Council website says the development application is an abuse of the process.

“I submit the developer is trying to wear down Council and the public through attrition,” the submission says.

For the first week of submissions being accepted, the DA was not showing up on the Council electronic submissions page, another cause of annoyance and suspicion for residents.

It has since been rectified.

Details on the proposal can be found if you put the DA number into the council DA tracker on the council website.

Find the DA Tracker under the “Plan and Build” tab on the council homepage.

Team will cycle three suburbs in a day

Fatality on board dive boat