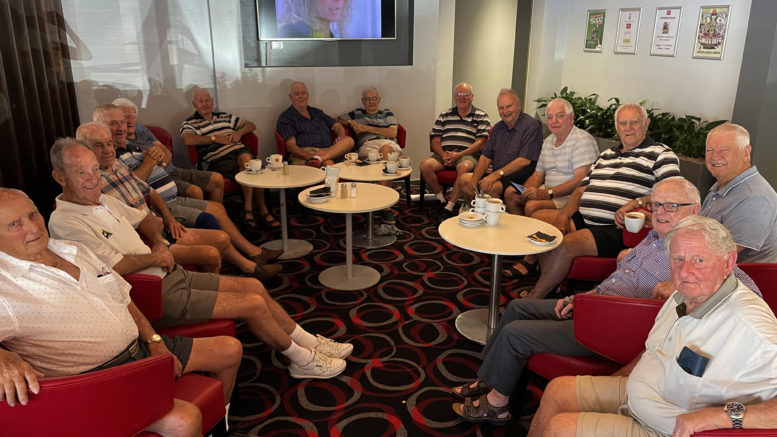 The Coffee Club at The Grange Hotel

Les Place and a group of mates meet every Thursday at The Grange Hotel in Wyoming to reminisce and talk sport and they call it the Coffee Club.

Place said the group started six years ago when he and three others met every week at Gloria Jeans in Wyoming.

“We were old mates who used to just meet down here on Thursday mornings to go shopping, and we thought, we should go have a cup of coffee; that’s how it started,” Place said.

After a while, the group moved to The Grange Hotel and since then has increased to include up to over 13 people.

“There was a sign put up at the Grange Hotel saying ‘coffee at 10 o’clock’ so we thought we would just go in there,” Place said.

“We invited a few of the guys along, and it grew over the years.”

Place said anyone is invited to come down and have a coffee and talk about old times.

Licensee and owner of the Grange, Mick Hill, said the group had become a great way for people to spend a couple of hours seeing some old friends and making new ones.

“It is just a group of old Gosford people who recall the old times and how Gosford has changed,” Hill said.

“They keep in contact with each other about others who have moved away, and other details like that.”

Doug Holmes is a new member to the group and said the group has been great for catching up with people he has not seen in a while.

“I haven’t seen some of these guys because I’ve been up in Queensland for four years and when I came back all these fellows had changed,” Holmes said.

“I used to work with some of these guys.

“A lot of us have got old memories that a lot of the younger people would not even know.

“Some of the boys are old footballers, and they talk their football days, and others talk about cricket.”

Peter Kerr Col Parry, and Mick Birt were absent on the day of the photo.