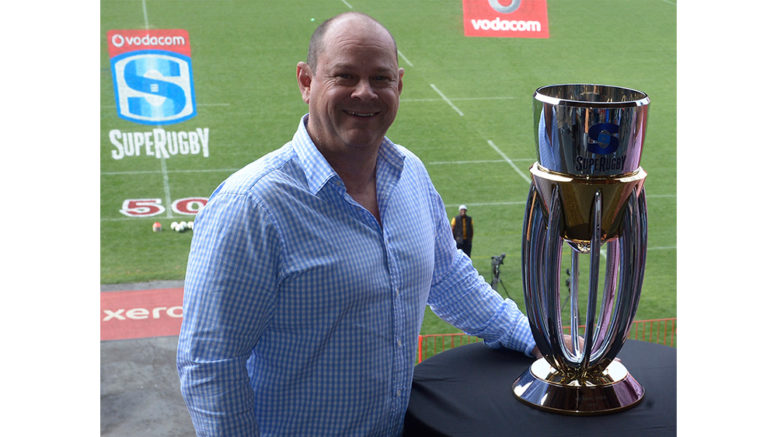 Brendan Morris next to the Super Rugby Trophy

The decision became effective as of 1 February, after Andy Marinos left the role to take up the CEO position at Rugby Australia.

Morris played the majority of his own rugby career in Gosford with the Red Devils, coming through to the first grade from 1986 to 1990, moving to the Kariong Wanderers between ’91 and ’93, then taking his rugby career overseas to Ireland and the US for a number of years before returning to Gosford in ’97.

His background playing rugby at the top grade, local grass root level has led Morris to see the sport as an integral stepping stone in forming, not only his career, but also his core values.

“Coming from a rugby culture made it a lot easier to navigate the administrative body because I understood the values of the game,” Morris said.

“Rugby separates itself from other sports because we hold the values of respect, teamwork, integrity and passion so highly.

“The place to learn these values is through club rugby, and you can take them into any corporate world and already be a step ahead.”

Entering into the SANZAAR executive office after the difficulties world sport faced in 2020, Morris has set his intentions around re-engaging fans for the upcoming year of Super Rugby which kicks off domestically in Australia on the 19 February, with a Trans-Tasman competition starting in May.

“To reengage fans this year, we’ve been innovative with our competition rules so that you will see new law variations to speed the game up, keep the ball in play longer and make the games a better spectacle,” concluded Morris.

In International Rugby, the Wallabies are hopeful for the resumption of the full Rugby Championship after South Africa’s withdrawal in 2020, as well as potential for a test series against France and a bid for Australia to host this year’s scheduled British and Irish Lions contest against South Africa.

Morris confirmed that these plans are still being finalised and a decision will be made soon.

Offer made to preferred candidate for General Manger