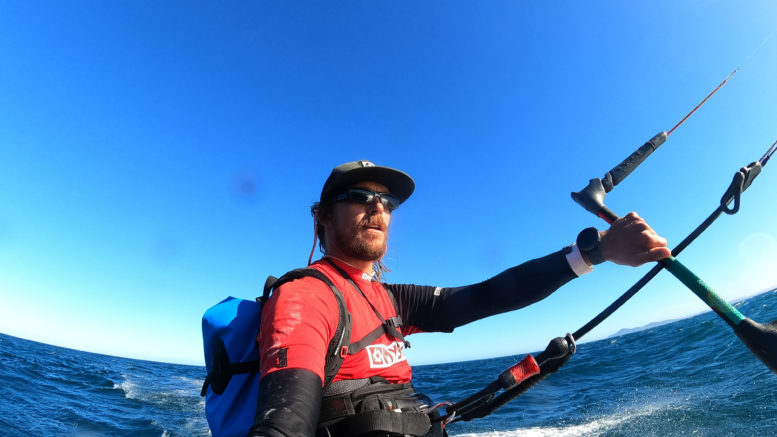 On a mission to break a Guinness World Record for the longest journey kitesurfing, Brian Kiss von Soly took a pit stop on the Central Coast to outwait bad weather on
February 1.

Kiss von Soly started in Queensland on December 28 and has so far kite surfed 674km over 13 days on the water.

He is currently only 188km from the record.

But even after he breaks the record, he plans to continue down the East Coast to Melbourne.

“I think if I hit Narooma just below Sydney that’ll be the record, but I’m going to keep going down to Victoria,” Kiss von Soly said.

“Hopefully I get into Melbourne, but I do understand the coastline there is pretty gnarly, so I’m just going to see how I go.”

Leaving near the border of Queensland with a kite, a board and a backpack, Kiss von Soly has averaged 70km of kitesurfing each time he is on the water.

“I haven’t been moving as fast as I wanted; it’s probably been the worst year to do something like this,” he said.

“Normally we get three to four days of north-easterly winds, but there’s been lots of rain and southerlies, and it has been all over the shop, so it’s been slow-moving.

“I’ve got a dry backpack, and in it I have a sleeping hammock…like a normal hammock but with a mozzie net built into it.

“I have a sleeping bag, a tiny little hiking cooker with a gas stove, and just some dry food like quinoa, buckwheat and rice.

“I’ve got some technology like the go pro and a battery bank to charge my devices … oh and some water as well.

“I do have an Emergency Position Indicating Radio Beacon (EPIRB) with me, which I paid with for the best subscription service.

“(This) means if I ever do get in trouble, I can get a helicopter to pick me up, take me to the hospital, and fly me home.

“So, it is not a suicide mission; I do have a backup plan.”

Kiss Von Soly said the first time he took the kite surf out with a backpack was the day he left.

“I didn’t realise how extra weight does affect your legs, so future Brian would’ve probably told past Brian to do some leg workouts,” he said.

Along the way he has received a large amount of support from locals, occasionally taking up the offer of a hot shower and a meal.

“I am doing it for personal achievement; I had 44 days of annual leave, so I took it all,” he said.

“There are some times where I’m just stuck somewhere so I can rest and recover, and the people I’ve met are just amazing.

“You tell them a story and introduce yourself, and when you tell them what you are doing, people at first are quite amazed, and they are really hospitable as well.

“I was meant to go back to work on February 8, but since then I’ve resigned because I’m not moving as fast as I wanted.

“So now I’m just a free agent and doing this until the bank account goes dry.”