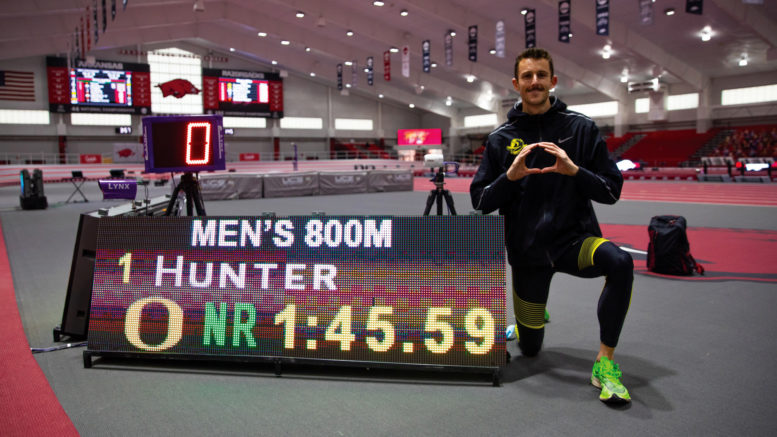 Charlie Hunter next to his record breaking 800m time

Central Coast Grammar School 2014 graduate, Charlie Hunter, is setting new heights for Australian middle distance running in the US, where over the past month, he has set three new Australian records.

Running for the University of Oregon track team as part of his college scholarship, the 24 year old caught global attention at the Razorback Invitational, hosted by the University of Arkansas at the Randal Tyson Track Center, when he broke his first Australian record in winning the indoor 1 mile.

Two weeks later, Hunter competed at the Tyson Invitational, also held at the Randal Tyson Track, where he re-broke his previously set record by more than a second, shaving it down to 3:53.49.

For Hunter, growing up on the Central Coast has been integral in developing his athletic prowess, ever since he began with Terrigal Wamberal Little Athletics from age nine.

“I grew up near the beach so surfing was always a big part of my upbringing, as was soccer, rugby, triathlons and cross-country.”

At age 14, Hunter was competing at the state and national level, culminating years later in winning the Australian U20 1,500m title and gaining selection in the Australian team for the International Association of Athletics Federation’s (IAAF) World Cross Country Championships in 2015.

In March 2018, Hunter left Australia to start his Business Administration Degree and run with the track team at the University of Oregon.

Since then, he has pushed himself to reach new heights, setting his sights on the highest level of world competition.

“In the lead up to the Razorback Invitational, I thought I had a really good shot at breaking the Australian record and I was elated with my end result” Hunter said.

“Two weeks layer at the Tyson Invitational, I had put even higher expectations on myself for the 1 mile.

“I knew that if I ran my hardest and left it all on the track, I would probably be rewarded with another Australian record, and that’s all she wrote!

“However, winning the 800m the following day was a bit of a surprise.

“I went into the Tyson meet to run the mile and the 800m was more of a consolation prize that the Oregon team were going to run as training.

“I was exhausted after the mile, they had to scrape me off the track!

“The night of the mile I felt terrible, but in a call home, my dad was adamant that I should run the 800m, so in the end I decided to give it a red hot crack.

“The plan was to sit in and be competitive towards the end of the race and it turned out to be an almost perfect run.

“I sat in, made a strong move with my team mate at the end, and it felt fantastic.

“It was night and day compared to the race the night before.

“I was shocked when I saw the time, although I wish I knew I was running so quick because as it turned out I missed the Olympic standard by about 0.2 of a second.

“Nonetheless, I think there’s definitely potential for me there in the future.”

Moving forward, Hunter is adamant about matching his efforts in the 1 mile in the 800m, and is looking to the upcoming National Collegiate Athletic Association’s (NCAA) Athletics Indoor Championships on March 11-13, where he will again represent the University of Oregon.

“First and foremost, my goal is to win the 800m and Distance Medley Relay (DMR), and put some fast times up.

“Long term, my goal is to chase these quick times and see if I can get selected for the Olympic squad,” concluded Hunter.

With the immediate future of the Olympics still shrouded in uncertainty due to the Coronavirus pandemic, here is one athlete preparing himself in all the right ways for the resumption of international sporting competition.