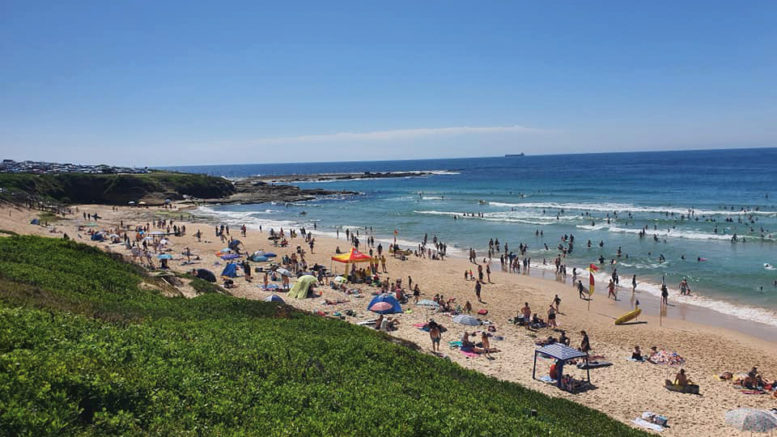 Similar record breaking figures have since poured in from surf lifesaving clubs around the state, with the surge in visitors attributed to pandemic border closures keeping people from seeking a beachside holiday interstate.

Cusack believes that’s exactly what happened on the Coast, with locals and NSW holidaymakers alike making the most of the glorious weather.

“Given how busy we’d been over the summer holidays, we were expecting it to be a big weekend and I’m pleased to report that there were no major incidents with 168 rescues, 325 first aids and 11,600 preventative actions performed across all SLSCC patrolled beaches over the four days.

“Crowds were all very well behaved and I congratulate all of our lifesavers on their hard work, not just over the weekend but throughout the summer holidays,” Cusack said.

But despite those affirmations, the weekend did not go off without a hitch, with minor incidents plaguing both ends of the Coast.

Down south, Terrigal lifesavers had a smelly start to their Australia Day when a sewer overflowed into Terrigal Lagoon, forcing the closure of the popular swimming hole.

Later in the day the lagoon was the site of Terrigal’s second major incident, when reports of a man floating face down and unconscious in the water caused lifesavers and emergency services to spring into action.

“A roving patrol from Terrigal was sent to the location, and they were faced with a difficult situation, with a group of teenagers who appeared to be intoxicated, and the person in question (also) appearing to be intoxicated.

“He ended up standing up and staggering away to the shore with his mates and said he was ‘just joking’.

“But we have to take everything seriously because we never know when it is real,” Cusack said.

Further south, Ettalong Channel was the site of what Cusack described as the region’s biggest incident, with a partially submerged jet ski posing a risk to swimmers and boaters.

“The partially sunk jet ski was located by one of our roving patrol jet skis.

“We alerted Maritime, and they attended and towed the sinking jet ski back to Ettalong boat ramp,” Cusack said.

Back up north and beaches around the former Wyong Shire proved calmer than their southern counterparts, with the only issue of concern on Australia Day some lingering bluebottles.

“We had some bluebottles around Lakes and Soldiers earlier in the week, but other than that, things up north were pretty uneventful,” Cusack said.

One incident of note was an apparent scuffle, which occurred late into the day at Soldiers Beach.

Wyong MP and Soldiers Beach SLSC member, David Harris, was on patrol on the day and said the fight was quickly dealt with.

“Our understanding of the incident was that it was between two members from the same family group who’d had a bit too much to drink.

“Lifesavers helped settle things down and police were called to sort it out,” Harris said.

Arguably the most popular beach within the Wyong region, Harris said huge crowds made the most of the idyllic conditions at Soldiers throughout the weekend, but a strong back current kept swimmers and lifesavers on their toes.

“On Australia Day there was a pretty nasty rip out the back of the beach and that kept us pretty busy.

“We did about 30 rescues during the day and because the beach itself is so long, it was a real challenge keeping an eye on everyone,” Harris said.

With that in mind, Harris encouraged visitors to Soldiers to always swim between the flags and to follow instructions from attending lifesavers.

“People need to remember that lifesavers aren’t on the beach to give them a hard time, we’re there to keep them safe and we certainly can’t rescue you if we can’t see you, so always swim between the flags.”

It’s a message Cusack agrees with and one he hopes locals will keep in mind for the rest of the summer.

“I would like to add that swimming and alcohol do not mix.

“It’s a recipe for disaster and it just makes everyone’s lives more difficult, so please don’t put yourself, your family or your rescuers in that situation.”

Cusack added that swimming at an unpatrolled beach was always a gamble and that locals and visitors unsure of safe places to swim should always check the Beach Safe app.