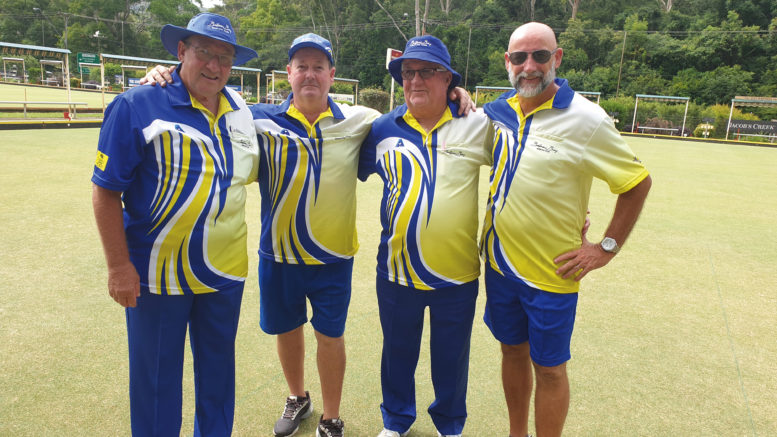 Bateau Bay Bowling Club have found themselves preparing for two Central Coast wide (Zone 15) Grand Finals in the 2021 Fours Championship, in both the Opens division and the Seniors.

In the Opens, Bateau Bay had 3 out of 4 teams playing off in the Section One semi-finals at Ettalong, with two of them reaching the finals, where P. McCarton, J. Watson, C. Edwards and R. Rewco won over G. Coleman, M. Burnes, R. Wood and W. Power.

After some sensational games, it was the team led by Ron Spek that played the Lee Patterson led side in the Section Two final.

After a very tight game, Lee’s team won by 18 – 14 and will now play the Bateau Bay winners of Section One in the Fours Grand Final.

The Seniors division involved some tremendous match ups as well, with all the games being played at Avoca Beach Bowling Club.

The Section One final came down to the Bateau Bay team led by Tony Shoebridge and Philip Westcott’s team from Ettalong.

The two teams went into this final with a healthy rivalry already running between them, with Westcott’s 2019 Fours Championship team losing to Shoebridge’s team, who at the time played for Terrigal Bowling Club, the next year in 2020.

Both these teams had been favourites for winning the overall Championship this year before being drawn in the same section, therefore everyone knew that they were in for a great game to watch and worthy of a Grand Final.

However, the Tony Shoebridge led side played the cold wet conditions better than the Phil Westcott led side and won by a comfortable 22 – 8 margin.

The Tony Swaine led side beat the Chris Epple led side in the section 2 final 22 – 13.

This Grand Final, along with that of the Opens and Presidents Reserve, will all be hosted by Ettalong Bowling Club, from 1:00 pm on Sunday, February 7.