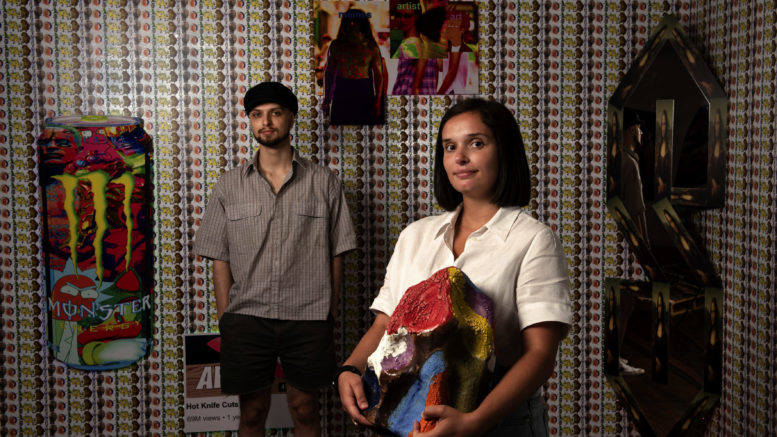 Art runs in the family for the Lynches, with Central Coast twins, Amelia and Harley Lynch, graduating with a Master of Fine Art (MFA) from the National Art School (NAS) in Darlinghurst.

After five years of study, Amelia and Harley’s majors will appear in the NAS Postgrad show, running from February 12-21.

Amelia’s inspiration behind her ceramic piece, Eastern Rosella, was taken from places such as Katandra Reserve, Bouddi National Park, Girrakool, and small creeks in Erina.

“My art-making practice explores my connection with the Australian landscape,” Amelia said.

“I’m particularly interested in the textural qualities of the micro and macro landscapes of the Central Coast and places I have visited.

“The glazes suggest the textures of eucalyptus bark, wattle flowers, concave rock pools and the reflections of water in bush creeks, and yabbie exoskeletons.

“All my glaze colours come from the native flora and fauna of Australia.

“My work seeks to replicate these patterns, forms and colours through the use of crawl, crackle and matte glazes.”

Harley’s major in photomedia is called Kyle’s Monster can.

Amelia said working on two different mediums made sure neither of them felt competitive.

“We are definitely not competitive people at all, if anything we help each other grow in each of our mediums because we can provide our own constructive comments to each other,” she said.

NAS Director and CEO, Steven Alderton, said he was proud of the NAS graduates despite it being a turbulent year.

“Despite the difficulties and disruptions this year, their outstanding and accomplished work shows they are ready to join the celebrated ranks of NAS alumni,” Alderton said.