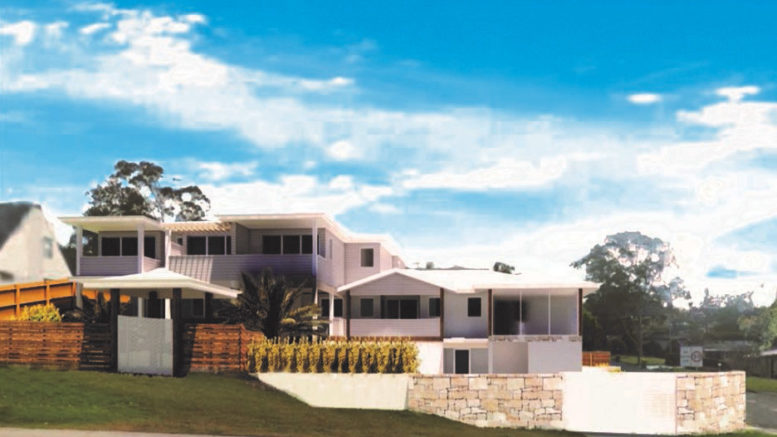 An architectural rendering of the proposed development Photo: ADG Architects

The Panel approved the DA for the latter at its February 4 meeting, subject to various conditions including an amendment to the landscape plan to provide additional native trees at least 3m tall along the side and rear of the building.

Despite attracting 68 public submissions during its first exhibition period and 17 from a second exhibition period the development application, which had been scaled back from nine units, was deemed by the Panel to be satisfactory in regard to relevant environmental planning policies, plans and policies.

Submissions had raised concerns raised regarding privacy impacts on neighbours, acoustic impacts, the bulk and scale of the development, waste issues and economic impacts on nearby property values, but the Panel voted unanimously to endorse a Central Coast council, recommendation for approval.

The latest proposal is on the corner of Raymond Tce.

The site is occupied by a split-level home which is to be partly demolished with subsequent alterations and additions.

The applicant says this will ensure a more viable development and higher standard of affordable housing compared to that which would otherwise be provided should strict adherence to the Local Environment Plan standard be applied.

“The proposal is an efficient use of the land which delivers social, economic and environmental benefits to the local community,” the applicant says.

The maximum population would be 19 lodgers (7 x double rooms and 5 single rooms) with ground floor parking for six cars.

The applicant says it is a high quality modest sized boarding house that will provide substantial benefits to the local community particularly for those over 55 and for people with disabilities who live locally and who want to downsize and reside close to their families and established social networks.

3 Comments on "Another Terrigal Drive boarding house on public exhibition"