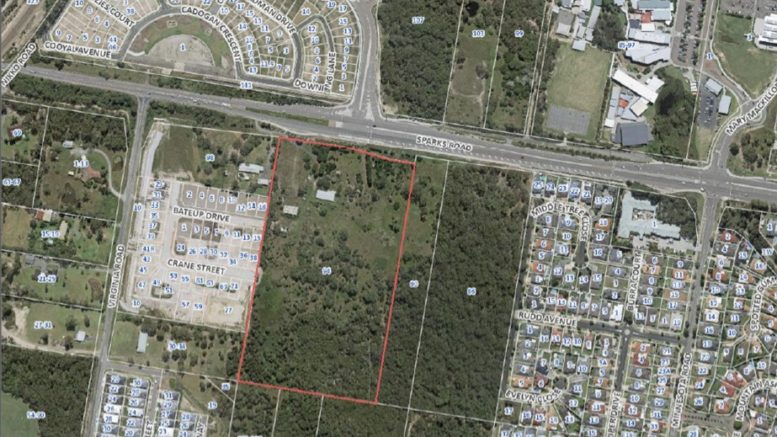 A residential subdivision for 88 residential lots goes to the Local Planning Panel for a decision on Thursday, February 4 but a decision is not generally made public until about a week after the meeting.

The 88 lots including small lot housing at 94 Sparks Rd, Hamlyn Terrace was submitted by applicant RAJ & JAI Construction Pty Ltd on behalf of owner I Kodzoman.

Both the R1 and R2 portions of the site provide dwellings at the rate of 18 dwellings per hectare resulting in the site exceeding the dwelling targets.

The R1 portion of the site would be further increased with the future development of a proposed residue lot along the eastern boundary.

The matter was referred to the Local Planning Panel as a result of the proposed variations to minimum lot size requirements but the report from Council to the panel recommended approval.

The minimum lot size of the three lots of E3 land would be slightly less than the 40ha allowed by the guidelines.

A boundary retaining wall which is not meant to exceed 900mm would be exceeded by 0.586m which equals a 65 percent variation, according to the report to the panel.

The proposed variation does not extend for the full extent of the boundaries with less than 50 per cent of each boundary to be provided with non-compliant retaining wall, the report says.

“The proposed retaining walls are required as a result of the existing topography of the site and the need to create suitable road levels and building sites.”

The site currently contains a dwelling with associated outbuildings.

The southern portion of the site contains vegetation consistent with an endangered ecological community (EEC) of Swamp Sclerophyll Forest.

“No other endangered flora or fauna has been identified on the site or will be impacted as a result of the proposal.

There will be no significant impact upon the natural environment as a result of the proposal,” the report says.

The land is located within an area that is currently being redeveloped from large vacant lots into new housing estates.

Land immediately to the east of the site is vacant and is owned by the Department of Education with no plans known for the site.

The Department of Education owns a number of parcels of land in the locality.

The Warnervale Town Centre is located to the north and is currently undergoing development.

The development will include the construction of internal roads and a collector road, as well as retaining walls to a height of between 0.106m and 1.213m, vegetation clearing, and associated services.

The collector road will run from north to south through the site and will connect Sparks Rd in the north to the lot to the south and eventually Warnervale Rd, through another subdivision.

The proposed collector road will include the construction of the southern portion of the Sparks Rd signalised intersection with the Warnervale Town Centre.

The report says the development is likely to result in positive economic impacts through the provision of a variety of cost-effective housing and through employment generation during the construction of the development.

Any proposed adjustments to Council’s sewerage assets will require a detailed design to be prepared by the applicant.

Any adjustment or protection of the sewer mains are to be fully funded by the developer.

Another tree goes with a developer friendly decision