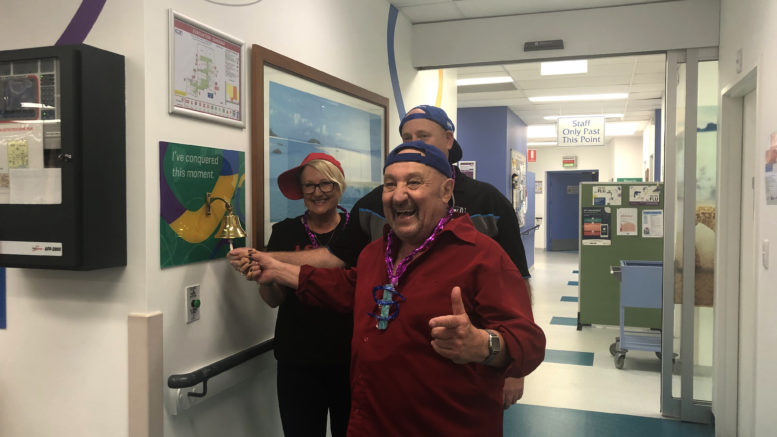 It was World Cancer Day on February 4 and to celebrate, Icon Cancer Centre in Gosford recognised its 25 years of treating patients on the Central Coast.

This system is an image guidance machine that offers high dose radiation treatment to tumours with pinpoint precision and speed while minimising exposure to surrounding healthy tissue and organs, reducing treatment time to less than 15 minutes.

Jerry Zarb, 79, used the technology after being diagnosed with prostate cancer for the second time.

“The surgeon actually removed my prostate in 2003 and said to me after the operation all of the cancer was closed in the prostate so I would have no more problems and no more cancer, which made me happy at the time,” Zarb said.

Unfortunately, the cancer came back when he was in his late 70s.

“I thought, bugger it, if she’s [Dr Teh] gonna give it a go, then I’ll put up with the inconvenience,” Zarb said.

For the next six weeks, he attended radiation therapy at the centre Monday to Friday and much to his relief, Zarb is now cancer-free, proudly ringing the bell and performing a rap about his radiation therapy experience with his son and daughter by his side.

“Every six months since September 2019, my PSA tests have so far come back as undetectable,” Zarb said.

“I’m so happy; I have a lot of life left to live -so I’m grateful to have been able to get the treatment I need.

“The team is fantastic, from the reception to the nurses and doctors.

“To have gotten in fairly quickly and not had to be put on a waitlist or travel to Sydney made things much easier.”

Icon Radiation Oncologist, Dr Amy Teh, has worked at the centre since 2009 and said she enjoys the community feel of the practice.

“Going through cancer is a really big life-changing impact; it really makes you think about what life is about, and how you are going to live life,” Teh said.

“In that sense, you’re stepping into someone’s life, where you can help and make a difference as well.