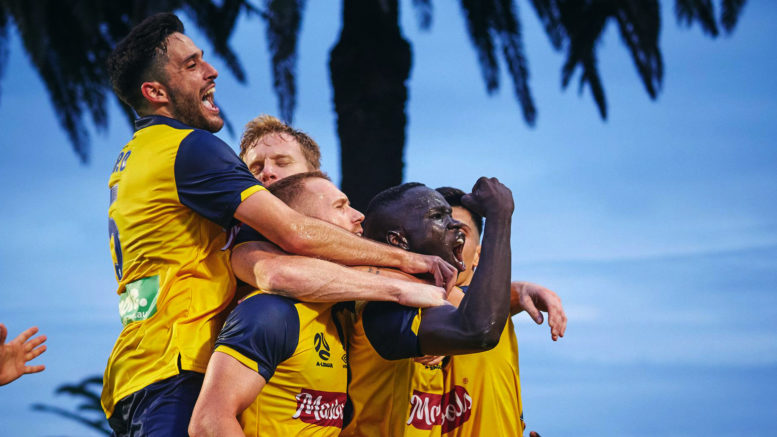 A second win in three days has pushed the Central Coast Mariners to the top of the table after a clinical 2-0 win away against Macarthur FC.

While the end result of 2-0 didn’t reflect the tightness of the 95 minute game, the Mariners have booked the three competition points and now sit atop the A-League ladder on 6 points with a 3-0 goal differential.

Despite maintaining a dominant control over possession throughout the game, Macarthur found limited opportunities to test Mariner’s goalkeeper, Birighitti, who earned himself another clean sheet.

The Mariners, on the other hand, were able to take advantage of their limited time on the ball and showed themselves to be an effective counter-attacking side, splitting open the Macarthur defence several times in each half.

The first 30 minutes went by without either team finding space in front of goal, but that all changed in the 35th minute when the Mariners Danny De Silva latched on to a cross from Josh Nisbet after Nisbet had chased down a pacey through-ball by Nigro.

The second half started with a surge in intensity from Macarthur that asked more questions of the Mariners defence.

Tensions continued to rise as Macarthur kept pushing the focus of the game further up the pitch.

The Mariners were forced to match the intensity of their hosts, and in doing so gave away a number of fouls that Macarthur will be disappointed they didn’t capitalise on.

After a number of chances gone begging from Macarthur, another counter-attacking opportunity deep into extra time was capitalised on by Jordan Smylie, on the end of a cross by 22 year old A-League debut Daniel Bouman running on to a forward lob down the right hand side by Lewis Miller.

Bouman edged forward, forcing Macarthur goalkeeper, Federici, to commit before sweeping it across to Smylie in front of an empty goal.

It is unfamiliar territory for the Mariners after a crushing wooden spoon year in 2020.

The once-mighty blue and yellow have not won back-to-back games since December 2017.

Central Coast Mariners’ Head Coach, Alen Stajcic, believes that back-to-back wins for the Mariners have laid a good foundation for the season ahead.

Speaking post-game, Stajcic told reporters that it was a win built on strength and resilience from the group.

“For me personally it’s a relief, but for the club, it’s a just reward for the hard work that’s been done behind the scenes,” he said.

“There’s a lot that’s gone on here for a small club with limited resources, to come up against the Bulls with all their resources, albeit a new club, for us to fight and scrap and the resilience and heart and spirit, it just shows what a football club can do to overcome the odds.

“Add into that a two-day turnaround, it’s a tremendous effort from the group.

The win also marked back-to-back clean sheets for the Mariners for the first time since early in the 2017/18 season, and Stajcic praised his young backline, and in particular, Ruon Tongyik.

“Ruon for me last year struggled to play two good games in a row, he was hot and cold,” Stajcic said.

“He’s had a great pre-season and he’s been one of the best workers in pre-season, and for him to get the reward of two great back to back performances is great.

“With Kye Rowles, at such a young age, to be leading a team from CB and when you throw a Lewis Miller, he’s 20, we really are young and inexperienced, and in front of them, Gianni Stessness, who is only 21.”

“Across that backline they’re so young and that’s where the communication and leadership is so critical and that’s really the part of the team that’s improved this year.”

Stajcic continued his talk about the leadership group, in particular the grit and strength that Oliver Bozanic has brought to the group since arriving prior to the post-COVID period of last season.

“We had a good post-COVID period, and the core of that group is still here,” he said.

“When I brought in someone like Oli Bozanic, it just accelerated the whole process in the team, the leadership within the group.”

“Matt Simon has been a tower of strength off the field and Birraz (Mark Birighitti) has stepped up as well.

“Those people really help fast track and it has all the core ingredients that make a team as united as what we are at the moment.

“I’m wary, it’s two wins and we’re all happy today, but it gives us good foundation for the rest of the year.”

Stajcic and his players will now welcome Stefan Jankovic, Marcos Ureña and Michal Janota to the squad later this month as the three visa players exit their hotel quarantine period.

The Mariners do not play again until January 19 when the Wanderers come to Gosford.

Two draws in three days and the spoon is ours (again)