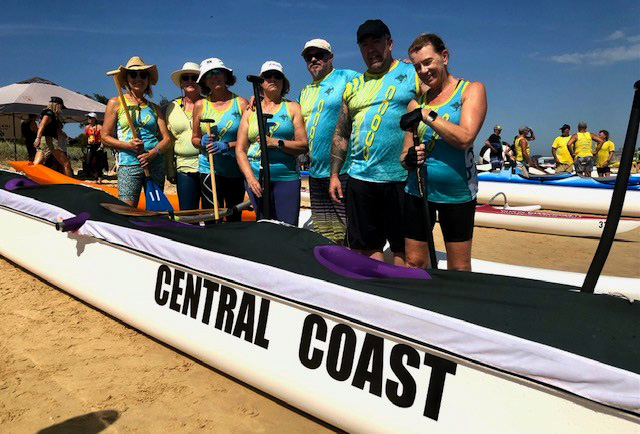 A training session turned into a rescue mission after a crew from the Central Coast Outriggers heard the yells of a man floating in rough ocean conditions around Lion Island on January 16.

Crew steerer Pam Iliffe hopped aboard the Daringyang canoe and paddled out for an open water training session with five other crewmates at 7.30am on the day.

“I was the steerer of this experienced relatively strong crew, and safety was paramount,” Iliffe said.

“My intention was to paddle between Middle Head and Lion Island then turn on the left side of the island and head back to Patonga, as the weather at that time had deteriorated somewhat.”

Meanwhile, holidaygoer Tim Jordan and his friend had also paddled out on their skis on the sunny and calm morning, but conditions quickly turned rough once they rounded the corner heading for Patonga.

“Being on holiday and very relaxed, we just jumped in the skis and took off without leg-ropes,” Jordan said.

“I was in a new ski and not used to its handling character in these conditions (but) I was confident of getting back in the boat and told my mate to continue on.

“After two unsuccessful attempts, I lost hold of the ski in a big gust and watched it being picked up and rolled over several times at such a rate, that I was unable to swim fast enough to keep up.

“Eventually I gave up swimming after the ski and decided I needed to conserve my strength to wait-out being picked up.”

Jordan said he floated in the water for a while before noticing the crew heading towards his location, which was about a kilometre south-west of Lion Island.

Iliffe said they had heard the faint and distant sounds of someone calling out for help among the waves.

“I guess about 300 metres away, was a person in a life vest alone, floating in the water, a real human being out in these rough conditions, waving a paddle,” she said.

“He was disappearing and reappearing.

“As we paddled over, I was going over in my head some safety procedures, not knowing what to expect.”

The crew had a phone at the ready with Marine Rescue numbers, a first aid pack, and two coaches on board with first aid accreditation.

Iliffe said Jordan appeared alert with no visible injuries and wasn’t showing many signs of distress.

“Our coach, Jim, talked to Tim then helped him aboard; he was now showing signs of getting cold,” she said.

“I do not know how much longer it would have been before he would have lost consciousness.

“I can tell you, Tim was so pleased to jump aboard Daringyang and be heading back to Patonga.”

As they ventured back, they passed Jordan’s friend on the other ski, who had turned around to search for him.

“He saw me perched on the boat so was able to let my family know I was OK upon his return to Pearl Beach,” Jordan said.

“When they had me back at Patonga, Jim, organised a two-man jet ski to head out and look for my ski which by this time, would be south-east of Lion Island heading west in the prevailing conditions.

“So apart from losing my ski and a large chunk of pride, all ended well—my special thanks to the team for their assistance on the day.”

Iliffe said it was essential to respect the weather conditions and check yourself before venturing into the ocean.

“A life was saved, and lessons learned all round; I would like to thank the crew for their effort in rescuing Tim Jordan, it was a great result,” she said.