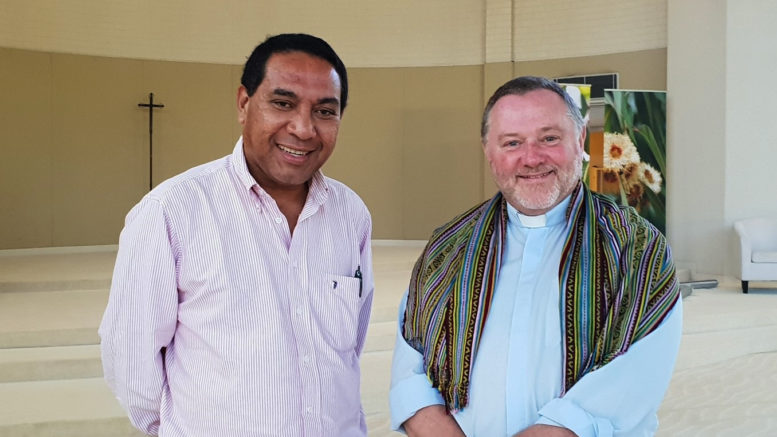 The relationship between Australia and the people of Timor-Leste was reinforced when the country’s Consul-General in Sydney paid a visit to Gosford Anglican Church on January 13.

Consul—General Luciano Valentim da Conceicao met with Father Rod Bower to thank him for the church’s sustained support of the Timorese people and its opposition to social injustices they have faced since the country was invaded by Indonesia in 1975.

Conceicao was accompanied by the Carvarino family of Hamlyn Terrace, who he hopes will be the subject of a documentary on the invasion and its aftermath.

It wasn’t until he was an adult that Jorge Carvarino realised the important positions his parents had held in East Timor before the invasion.

Brought to Australia at the age of six, along with his brother and sister, Carvarino was raised by his maternal grandparents, who had fled East Timor during the invasion.

He eventually discovered that his parents, both high figures in Timorese politics prior to the invasion, were incarcerated and eventually killed by the invading forces.

“I didn’t really know much about my family history growing up,” Carvarino said.

“Apparently they were both on a hit list and my father was captured by the Indonesian military and later killed,” he said.

“There is still mystery surrounding what happened to my mother following her surrender to the military.

“I didn’t really get to know either of my parents.”

Carvarino and his brother and sister were brought to Australia in 1983 and grew up in Queensland raised by their maternal grandparents, who had fled Timor-Leste after the invasion.

“A lot of the family history was hidden from us,” he said.

The siblings did not find out for many years that they also had a younger brother, who was adopted by an Indonesian general following the invasion.

“In 2009 we got a call saying they had found our younger brother and we have since reconnected via social media,” Carvarino said.

“I’m disappointed not to have known much about my parents and their struggles growing up.”

Himself highly active in Timorese politics prior to its independence in 1999 and since, Conceicao is determined to see a documentary on the Carvarino family come to fruition and is trying to interest the ABC.

Bower said there had been much upheaval, pain and suffering visited upon the Timorese people.

“They are one of our closest neighbours and it is really important for us to be conscious of their experiences.”

“This is an issue not just for our own nation, but for one of our closest neighbours, which saw many thousands of children separated from their relatives and culture,” he said.

“For me, the meeting brought home the human face of some of the issues faced by Timor-Leste.”

Bower said he would welcome another visit by the Consul-General, who hopes to return once social restrictions are further eased to address the entire congregation of Gosford Anglican Church.