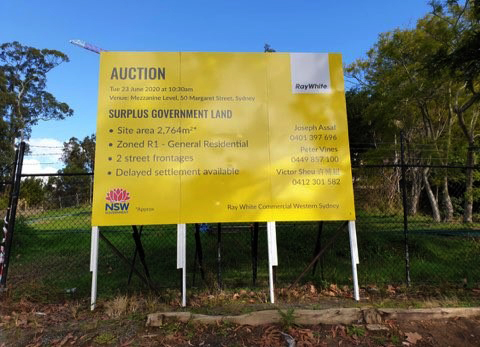 Land adjacent to Gosford Hospital was sold off in 2000

Member for Gosford Liesl Tesch is calling on the State Government to stop privatising public assets, saying the sale last year of land bordering Gosford Hospital could pave the way for more privatisation on the Central Coast.

Tesch said the government had failed to keep an election promise to stop privatising assets, with the remaining 49 per cent of the WestConnex tunnel likely to be sold and the continuing privatisation of Sydney’s bus services.

“Selling off NSW assets is not the only economically viable option to consider and instead it can be very damaging, with transport experts commenting that the WestConnex privatisation could be the most significant waste of public money for corporate gain in history,” Tesch said.

Tesch said there had also been no guarantee that TAFE facilities across the state would not be privatised.

She said privatisation hit the Central Coast in 2020.

“Government-held lands neighbouring Gosford Hospital, in the thick of the pandemic, during a price slump, was privatised and sold to developers for a great deal,” she said.

The only positive privatisation news that came out in 2020 was the failed attempt to privatise the Forestry Corporation’s softwood plantations, a decision that was made following the devastating impact of the bushfires, Tesch said.

She said the Government had denied access to a $1.2M scoping study into the privatisation plans with a freedom of information request was refused.

Tesch said 2021 could see a lot more privatisation in our backyard.

“Because of the NSW Government’s refusal to bail out Central Coast Council, despite the government’s forced amalgamation, swathes of Council land looks to be sold off,” she said.

But Parliamentary Secretary for the Central Coast, Adam Crouch, said Tesch’s comments were not reflective of reality.

“The 11-15 Ward St, Gosford site was previously owned by NSW Health and was deemed unsuitable for future use,” Crouch said.

“I absolutely have faith in the ability of Dr Andrew Montague and his team to make decisions that put our region’s health care needs first.”