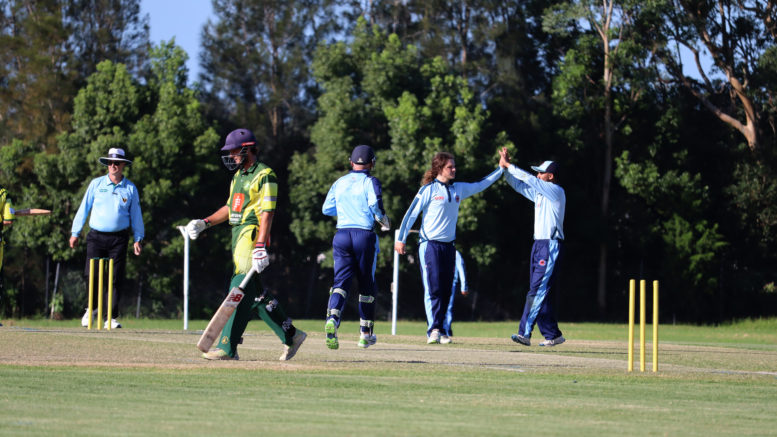 Two of the First Grade Cricket T20 Quarter Finals were contested on Thursday, 21 January with heart break for the two home teams.

The Wyong Roos fell to the travelling Warnervale Wildcats by eight wickets, while further south a nail-biting contest ended in the Lisarow Ourimbah Magpies falling three runs behind the score set by the victorious Terrigal Matcham Bellbirds.

At Baker Park, the Roos took to the bat first and set a total of 109 off their 20 overs, with highest scores going to Pat Daly who made 33 runs off 32 balls and Kane Wilson with 25 runs off 30 balls faced.

Warnervale’s Karin Katli did most of the damage, taking three wickets for 19 runs of four overs.

The Wildcats then chased after this score with plenty of venom in their strikes, especially opening batsman Simon Keen who made 52 not out off 40 balls faced.

In the end, the visitors topped their hosts score in the 15th over.

Meanwhile at Bill Sohier Park, an opening score of 110 runs by Terrigal Matcham was secured by the slightest of margins, with Lisarow Ourimbah losing their final wicket in the last over with 107 runs.

The Bellbirds were stunned early on with Lisarow’s Matthew Sunshine taking two ducks in the first over and ending up with 3 wickets for 18 runs over four overs.

The visitors found their stride soon thereafter with a 69 run partnership between Kristian Mitchell, reaching 26 runs, and Zach Peters reaching 39.

Once Lisarow dismissed these two, they began to run through the wickets again with the final one being taken in the last over.

A shaky start for Lisarow with the bat faulted their momentum, with Nicholas Toohey taking Ben Cohen for a Diamond Duck on the first ball of the innings.

Toohey went on to take 3 wickets for 14 runs with Harry Brien later taking 2 wickets for 17 runs, both off four overs.

A 34 run partnership between Mitchell Pennington, reaching 27, and Mitchell McBeath, reaching 16, gave the Magpies hope, with final batsmen Sunshine and Luke Jacobs needing 12 runs off the last over.

It came down to the last ball, with Sunshine needing a boundary to win, but in this final moment, Brien took his last wicket to secure the win for the Bellbirds.

Warnervale and Terrigal Matcham now look forward to a place in the Semi Finals, with final details still to be determined.

Special holiday show and workshop for young inventors and creatives