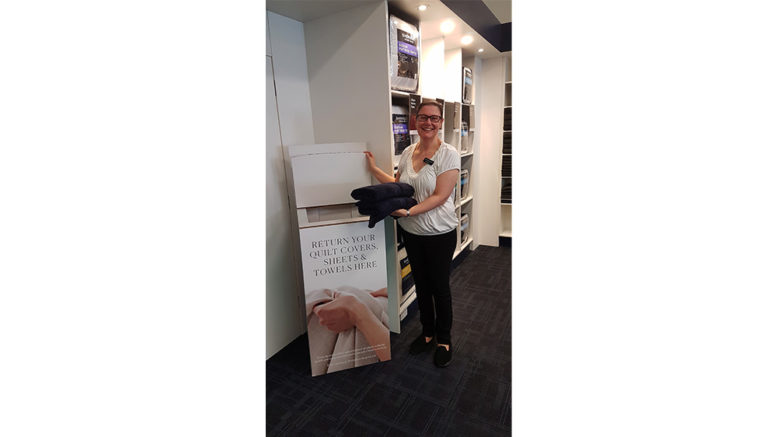 Residents now knowing just what to with their old linen are invited to drop it into the Sheridan store at West Gosford, as the company relaunches its recycling program.

Put on hold in early 2020 due to COVID-19 safety and hygiene restrictions, the initiative encourages homeowners to bring in their old linen, towels and quilt covers, from any brand, to be recycled and made into new products.

Group General Manager, Sheridan Australia, Paul Gould, said that while a spike in sales during isolation periods last year was favourable for business, it could be detrimental to the environment if customers were not encouraged to reduce, re-use and recycle in the process.

“Every Sheridan Boutique and Outlet store is equipped with a recycling bin, making it easier than ever for customers to ensure their unwanted products are diverted from landfill.

“Bed linen and towels brought into stores are collected by a third party and sent to one of Sheridan’s partner factories to be broken down into recycled materials.

“Prior to pausing the program in stores, we had diverted over 25,000kgs of textile waste from landfill.

“We’ve had a lot of customers returning product to be recycled,” she said.

“While we haven’t had it running during COVID, we’ve had a lot of people asking about it both in store and giving us calls asking when it would be returning.

“It’s been a very positive experience for us – customers are bringing in everything from towels to quilt covers to be recycled.

Recycling needs to be made compulsory