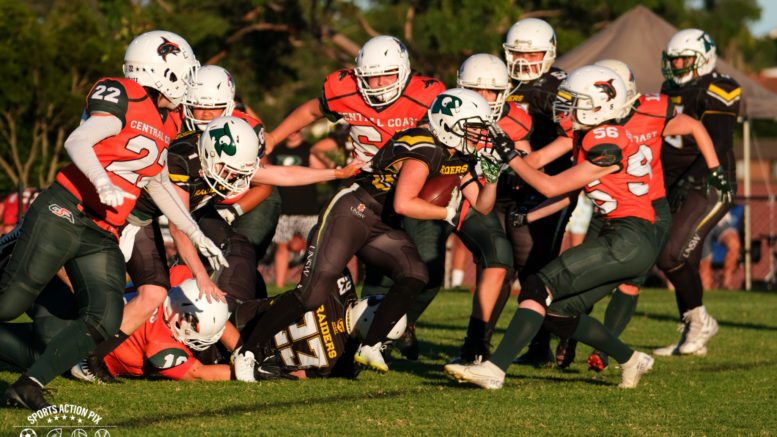 The Sharks in action against the Raiders Pic: Bevan Lenders/Sports Action Pix

While they may have ended their regular season with a loss, the Central Coast Sharks remain full of confidence ahead of the semi-finals of Gridiron NSW’s 2020 Women’s Competition.

The Sharks went down 40-0 against ladder leaders UNSW Raiders in their last hit out, putting them in third overall, with a record of four wins and four losses, but according to Club President, Luke Smidmore, seasonal records won’t account for much come the playoffs, with it all boiling down to who’s better on the day.

With the draw for the semis yet to be announced, Smidmore said the club will be focusing on training, with the fledgling Lady Sharks keen to leave their mark on the competition and make their first appearance in the Opal Bowl grand final.

With excitement bubbling over at that prospect, Smidmore said players and coaches had done a phenomenal job overcoming the challenges that the pandemic threw at them.

“For me it has been particularly good to see our rookies get in and really get involved.

“While we do have a few veterans, our core from last year’s inaugural team was mostly rookies and their progression this year has just been huge.

“Thankfully, this has also been a season with minimal injuries, which is great because it means we’ve got players ready to rotate and everyone is really looking forward to the semis in a fortnight’s time,” Smidmore said.