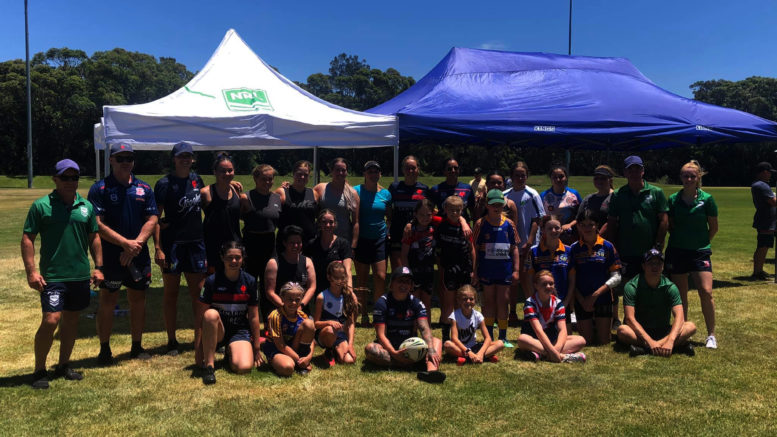 According to Hawks Junior Club Secretary, Jade Carberry, around 50 hopefuls attended the day and took part in a series of fun drills and activities designed to teach them footy basics, with the event delivered in partnership with the Hawks, Play Rugby League Central Coast and the Central Coast Roosters Rugby Academy.

“We had a lot of girls who’d never played before come and give it a go, which was great to see given that we really didn’t know what to expect,” Carberry said.

“This is the club’s first time ever running a clinic like this, so we’re absolutely stoked with the results.

“We had girls signing up on the spot for our 14s-17s as well as for our women’s team, which now has full numbers, and the day was such an overall success that we’re now planning one just for girls 10 and under.”

The new signings are particularly pleasing to the Hawks, who have been a local leader in getting girls and women involved in tackle league.

“As a club, a challenge we’ve struggled with has been keeping our girls once they age out of juniors.

“When there aren’t enough players it becomes difficult to field a team in those teen brackets and sadly, we do lose players to other clubs because of it, so that’s why we’re so happy with this outcome.

“We are a family club first and foremost and we want to be able to keep our girls onside and offer them opportunities to play from the juniors right through to the seniors, so growing our female player base is a high priority for us,” Carberry said.

With all grassroots clubs still awaiting advice from NSW Rugby League on what season 2021 will look like, Carberry said that for the time being, the Hawks will be focusing on their preseason preparations.