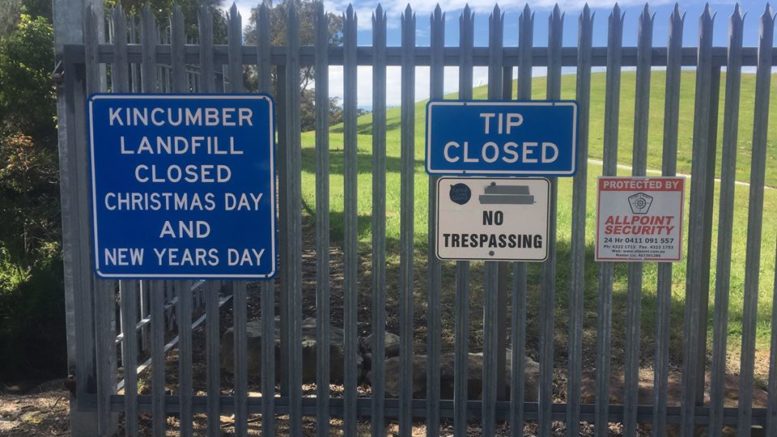 The reopening of Kincumber tip is looking unlikely, with Central Coast Council staff pushing for the site to become a place where soil and gravel produced as part of its service delivery can be stockpiled and reused.

A report to go to the Council meeting on February 3 explains that the tip could become a soil and aggregate resource recovery facility for Council material.

Council wants to keep the tip closed while it works on a business plan for the new idea.

The report said Council internally produces an estimated 90,000 tonnes of soils and gravels.

Often these materials are required to be stockpiled and analytically tested to determine their resource recovery classification prior to legal reuse.

Council needs a processing area where different materials can be sorted, tested and stockpiled for reuse on Council projects and residual material removed off site for disposal.

Staff seem to think the tip, which was closed as part of Council’s response to COVID-19 restrictions, is perfect for what they need.

It lists the advantages as: increased efficiency across Council’s operations; reduction in material being landfilled and associated cost savings, including reduction in NSW Waste Levy; and reduced demands on virgin natural resources through reuse of material.

The existing infrastructure, including sealed roads, weighbridge, security, hardstand areas and individual bays would work for the proposal.

Council estimated the capital costs to establish the required infrastructure on an alternative site would be $2M-3M.

Council says it would retain the strategic value of the site for future waste management needs such as a temporary waste storage area following natural disasters.

It could also consecutively undertake the remediation of the site long term for the development, for example, of a recreational park in the future.

The report says that, as a result of closing the tip in March last year, Council has saved money through reduced employee costs, materials and contracts.

To re-open, Council would need to recruit staff and renew a range of external contracts, which have since expired.

This would include a tender for the daily transport of waste to Council’s other waste facilities.

Since 2009, there has been no onsite disposal and limited waste sorting at Kincumber, with all waste reloaded and transported on a daily basis to Council’s Woy Woy tip.

The tip was initially acquired by Council as a quarry in 1958 and in 1977 it became a tip.

In the 1990s a tip shop known as Junkastic Park was established on a portion of the site operating under a license arrangement and it closed in 2003.

The land is subject to potential contamination from its past use as a landfill which limits any activities on the site.

Leachate and landfill gas collections are in place and the site undergoes quarterly monitoring in accord with its Environmental Protection Licence.

Long term remediation works would be required prior to allowing any public access.

Is latest announcement a good or a bad thing?