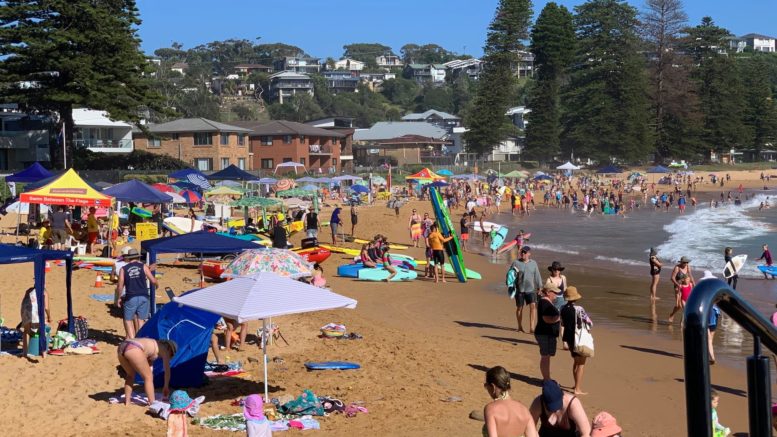 More than 200,000 people flocked to Central Coast beaches over the Australia Day long weekend, as authorities dealt with 168 rescues, a prank drowning at Terrigal, parking havoc and jet ski chaos at Ettalong.

Director of Surf Life Saving Central Coast, Simon Cusack, said approximately 218,500 people were recorded to have attended the 15 patrol beaches across in the region on January 23, 24 and 26.

“Numbers are well and truly up in comparison to previous years,” Cusack said.

Beaches such as Terrigal, The Entrance, Killcare, and Ettalong were just some which dealt with large crowds, as people tried to escape the soaring temperatures.

At Terrigal Beach, lifeguards were thrown into action early in the day with the lagoon having to be closed just before 10am following a sewer overflow.

The lagoon remained closed as we went to press with Central Coast Council advising crews had contained the overflow and were working quickly to remediate the issue.

Terrigal was disturbed a second time when three police cars, three ambulances and one fire engine were called to attend a prank drowning.

“The first reports were of an unconscious male face down in the lagoon,” Cusack said.

“A roving patrol from Terrigal was sent to the location, and they were faced with a difficult situation with a group of teenagers who appeared to be intoxicated, and the person in question (also) appearing to be intoxicated.

“He ended up standing up and staggering away to the shore with his mates and said he was ‘just joking’.

“But we have to take everything seriously because we never know when it is real.”

There were reports of a brawl at Soldiers Beach, but Cusack said the situation was dealt with quickly.

“There were lots of jet skis at Ettalong as expected and lots of boating traffic movement in and out of the channel, which is typical for this time of the year and a public holiday,” he said.

“One partially sunk jet ski was located by one of our roving patrol jet skis.

“We alerted Maritime, and they attended and towed the sinking jet ski back to Ettalong boat ramp.”

Cusack said the influx of beach-goers was “definitely related to COVID-19” and fully expected.

“We knew accommodation was fairly booked during the holidays,” he said.

“For example the caravan park at Umina Beach was fully booked out for the six weeks of the school holidays.”

Caravan parks at Shelly Beach and Norah Head were also known to be fully booked, he said.

“Plus you have the people who travel up from Sydney for the day.”

“Normally Blue Bay Beach is quiet, but it was as crowded as I’ve seen it in my 30 years of local residence,” McLachlan said.

“Parking was at a premium with many people having to park blocks away.

“Is it time to start considering metered parking for non-Central Coast residents?”

Parliamentary Secretary for the Central Coast, Adam Crouch, said Australia Day was a big test for our lifeguards.

“Firstly, I wanted to give a huge shout out to our amazing volunteer surf lifesavers,” Crouch said.

“Huge surf, hot weather; it was the perfect day to enjoy Australia Day … with the weather changes, we had a lot of people on the beaches and (the lifesavers) did a great job.

“What I would say to people visiting the Central Coast is you need to respect the great work our volunteer surf lifesavers do to keep you safe on our beaches.

“Beaches can be very dangerous, alcohol and water do not mix, and they need to be mindful of that.”