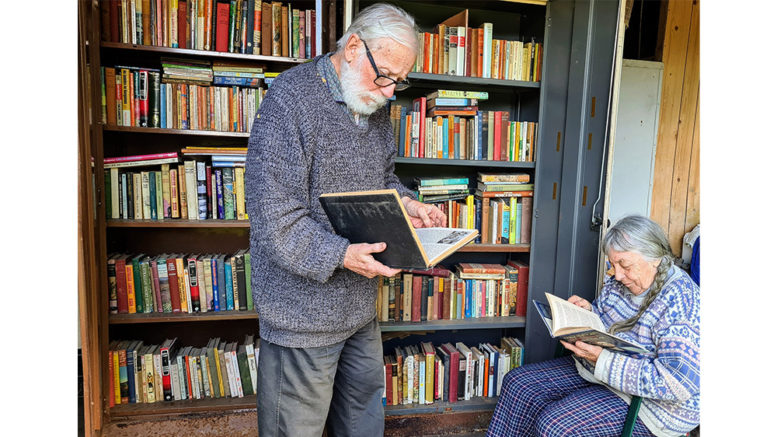 Rob and Pat Gowland want to establish a literary institute

Dooralong couple, Rob and Pat Gowland, are keen to find premises to establish a Central Coast Literary Institute to safely house, showcase and share their thousands of books, artefacts and journals.

Rob Gowland is Secretary of an ad hoc committee of 20 people who have come together for the purpose of establishing a literary institute and they are looking for a benefactor with premises anywhere on the Coast which they could fit out with book shelves, display cabinets and create a meeting and discussion area.

“We want somewhere permanent, something presentable, so that we can lay the collection out, invite people and showcase what we have and make proper use of all the things we have,” Gowland said.

“They are stored in numerous boxes and 21 cabinets at present, which is fine to preserve them, but not much use in any other practical way.

“The art and history of the cinema spills over from one cabinet into another, as does modern history.

“Philosophy and politics are also well represented, as is poetry and drama.

“That list has done little more than scratch the surface,” Gowland said.

The Gowlands have both reached their 80s now and are haunted by what happened many years ago to the stock of the iconic Stewart’s Bookshop at The Entrance after it finally closed and much of the unsold stock ultimately going to the tip.

“We don’t want our collection to end up going to the tip or just being sold off in a job lot at an auction somewhere,” Gowland said.

After spending many years building up this collection, the Gowlands and the group of friends and colleagues around them, would like to see their collection become the nucleus of a Central Coast Literary Institute and Reference Library.

Gowland was, for 10 years, the Director of the National Film Theatre of Australia and he said the informal committee working with him on this project was appropriately diverse, drawing in people from Newcastle, Sydney, Canberra and the Central Coast.

They include people involved in the film industry, the arts, youth organisations, a retired heritage architect, a psychiatrist, a former boilermaker at Garden Island Naval Dockyard who now keeps his mind busy as Vice-President of the NSW Tenants’ Association, and the treasurer of online organisation The Marxist Forum, as well as a retired public servant and a retired barrister.

“We have the literary basis of the institute already and we have a group of volunteer tradesmen available to build bookshelves and fit-out for appropriate premises as a reading come meeting room,” Gowland said.

“There’s also a couple of scanners for making copies, where permissible, of selected pages or passages.

“What we don’t have is someone who can provide us with suitable premises at essentially a nominal rent.

“Our needs are modest and so is our aim.

“It would, of necessity, be staffed by volunteers and would be financed by appeals among our supporters.

“Those working on this project believe the goodwill and resources already gathered together indicate it could ultimately be a distinguished cultural asset for the Central Coast,” Gowland said.