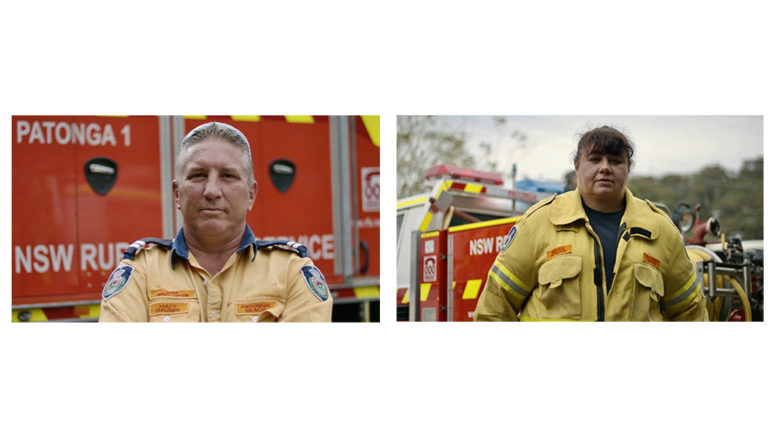 Two volunteer firies from the Peninsula have been commended for their efforts in containing the large bushfires which ravaged large parts of NSW last summer.

In December, Central Coast Council shared a collection of unique stories from 15 local heroes who stood up and helped support the community during the crisis.

Volunteers, frontline workers and community representatives were all recognised in the document, including Patonga’s Nicole Bergan and Matt Hauser.

Senior Deputy Captain, Matt Hauser, of the Patonga Volunteer Bushfire Brigade was acknowledged for his bravery during the bushfires last summer.

Hauser said it was an extremely tough and emotional time for his team and was something he had never seen before.

“Anything can change at any time, wind changes, things like that,” Hauser said.

“You can spot fire over containment lines, which happened to us on many occasions [and] then all of a sudden, you’re surrounded by fire and you’ve got to try and get that out before it goes into people’s properties.

“It was terrible … that’s all I can say.

“It was hot, you were exhausted when you came back, you’d get phone calls saying ‘Can you go out again, we need the people’, so you just gear up and do it again [and] that’s what we do.”

Hauser and his team fought to contain the Green Wattle Creek bushfire, which began on November 27, 2019, and lasted over two months.

“The noise of that fire coming up that ridge, it just sounded like a freight train … there’s no other way to describe it, it just roared up that hill,” Hauser said.

“Before you could see the flames coming up that ridge, all you could feel was the radiating heat.

Hauser explained the toll it takes on families, with many people left wondering about the safety of their loved ones out in the field.

“When you came home, your wife and kids, they hug you because they don’t know – there is no reception out there,” Hauser added.

“For them to support you through that, as a volunteer, is the best thing you could ask [for].

“My kids go to school and [say] ‘dad’s a hero’ but I don’t do it for that, I’ve always wanted to be community involved.

“Since I’ve been in the brigade up here it’s like my second family; I treat them all like I do my family … without my other members I’m nothing.”

The Coast was fortunate to sustain relatively little damage in last summer’s bushfires, with only four residential homes, one facility, and 15 outbuildings lost.

Coast firies managed to save 401 houses, 40 facilities and 51 outbuildings which were in the direct line of fires, and most importantly, no lives were lost.

However, the season still took its toll on locals.

Patonga’s Nicole Bergan, a call out officer from the volunteer bushfire brigade, was also named in Council’s collection of stories.

Bergan said the last bushfire season was a terrifying experience and something her team had never seen before.

“Usually a fire goes for a week maybe, but this was terrifying, it was all consuming,” Bergan said.

“There was a possibility that it wasn’t going to stop until it hit the ocean – that is exactly what I thought.

“There was a lot of people that I think … believed that.”

Bergan’s role as a call out officer is to allocate a team to go out and then maintain contact with the crew whilst they’re in the field.

“I think it was really hard managing that last summer because there were so many fires, so many calls for crews and the fatigue levels were really high,” Bergan said.

“I get scared and I get nervous and I get apprehensive when I hear things happening on the radio because I can listen.

Locals are being asked to continue to share their stories of heroism and bravery by contacting Council.