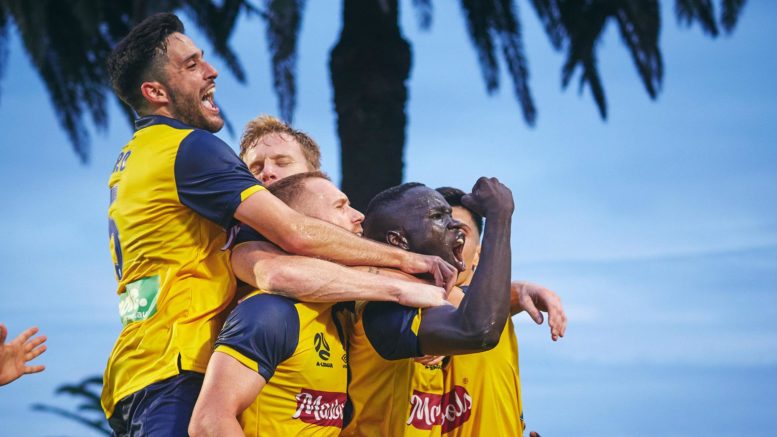 The Central Coast Mariners clawed their way to a 1-0 victory in their opening A-League match against the Newcastle Jets.

Over 5,000 fans watched the F3 derby at Central Coast Stadiummarking both the end of the year and the start of the nation’s top football competition.

The match was in the balance throughout the entire 94 minutes of playing time.

The Jets dominated early possession but missed many scoring opportunities, including a shot above the cross-bar, within the box from Angus Thurgate, on the back of clever footwork by Kosta Petratos.

In the 43rd minute, the breakthrough came from the Mariners with a combination by Stefan Nigro and debutant Alou Kuol.

A lofted free-kick from Nigro bounced in-between the Jets’ defensive line after a breakdown in communication.

With the Jets’ goalkeeper, Duncan, rushing forward to punch the ball away, a strong header from Kuol tipped the ball out of his reach and nestled into the back of the net.

The second half saw the Jets continue to push against the Mariners’ defence in search of an equaliser, but were kept at bay on the back of a couple of instinctive goal-line saves by Mariners keeper, Mark Birighitti.

In the 51st minute, a speedy, grounded cross across goal by the Jet’s Yuel found its way to Petratos, whose diving foot clipped the ball on target and forced a last-second punch-away from Birighitti.

Twenty minutes later, the Jets came knocking again, this time through Thurgate, with a side-footed curler from outside the box that was destined for the top, right corner.

It took another leaping save by Birighitti to keep the visitors goalless.

With the Jets unable to break down the Mariners defence, the game ended with the Mariners on top of the score board and (momentarily) the A-League ladder.

The first round victory will be a great confidence booster for the Mariners who now face Macarthur FC on Sunday (January 3) who also notched up a first round victory against the Western Sydney Wanderers, will also be playing for the chance to head to the top of the table.