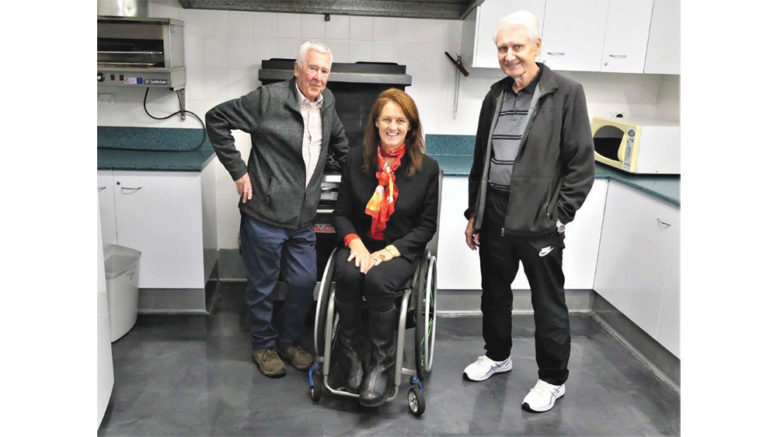 Gosford City East Gosford Lions Club is soon to have a completely renovated kitchen for its community hall, thanks to $25,000 in funding from the December round of 2020 Community Building Partnership funding.

Lions Club president Graeme Venn said demolition and removal of the original stove, old range hood and chimney, all of which dated from 1962, had already started and new plastering and painting had been finished where the old range hood was situated.

“It was huge, ugly and made so much noise it was hard to hear when working in there.” he said.

“The grant covers electrical, plumbing and painting and the Club also contributes in kind services valued at $2,000 from some of its skilled members.

“The kitchen floor had been resurfaced some months back and … new benchtops, storage cupboards and cabinet doors should be fitted near the end of January.

“We will have a new modern five-burner stove and oven, a new microwave, food warmer and upright fridge, making our hall very attractive to hirers.”

“The Club is very grateful for the help local contractors have given us in this difficult time and for the support given to our application by Member for Gosford Liesl Tesch.”

Venn said a loan had been provided by the then Gosford Council to Gosford City Lions to build a community hall on Council land at East Gosford “to create a better facility for use by our local community” and a permanent home for the Lions Club.

“The completed hall became the property of the Lions though the land is still Council-owned,” he said.

“In 2017 Gosford City Lions merged with East Gosford Lions to form the current Lions Club and the hall has since been a wonderful source of income for Lions community projects, the principle charter of all Lions clubs.

“During COVID-19 it was hired regularly due to its size and amenities and its ability to cater for persons with mobility needs.”