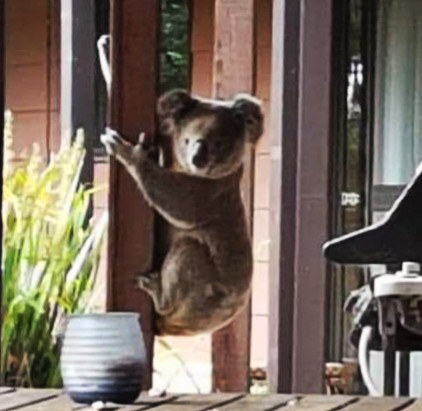 A koala sighted recently on private property at Ourimbah

The group has long advocated for the identification and preservation of koala habitat across the region and is now registering new sightings with a Government database.

With a three-month survey led by Central Coast Council staff just been completed and results set to be available early this year, CEA spokesperson, Jake Cassar, said it was time for meaningful action towards protecting koalas in the region.

“There have been over 70 registered sightings of koalas in our area over the past 20 years, and the sightings have been surprisingly widespread,” Cassar said.

“This doesn’t mean our koalas are not at risk of localised extinction.

“We need to ensure that their habitat is urgently protected and that wildlife corridors between these populations are not fragmented through development.

“CEA has officially registered sightings of koalas from Mangrove Mountain, Dooralong Valley and Kulnura and we even have a sighting only half a kilometre from Gosford CBD.

“More recently there have been sightings at McMasters Beach, Ourimbah and in the Basin camping area at the Watagans – only a few hundred metres from where logging is taking place in Olney State forest.

“I met with Council staff in March last year to discuss a proposed survey program to identify key koala habitat across the Central Coast.

“This survey is a critical starting point to a broader program to ensure that koala habitat is protected in our region.”

The field surveys took place between September and November 2020 during breeding season when koalas were most vocal and able to be detected through passive recording devices.

“Our community group with over 5,000 members will continue to push to see that our region is recognised as a sanctuary for koalas, not an easy target area for unsustainable development that threatens (their) habitat.

“The Central Coast can play a pivotal role in the overall survival of this iconic and extremely vulnerable native animal, but our elected leaders need to act now and put a stop to development in or around koala habitat in our region.”

Cassar said he imagined a tourist loop where visitors can visit koala conservation reserves, then visit the Walkabout Wildlife Sanctuary and the Australian Reptile Park to learn about local breeding programs.

“This would be a win for koala conservation while boosting our local economy in a steady and sustainable way,” he said.

“We have written to State MPs Liesl Tesch and Adam Crouch in the hope that they will lobby the State and Federal Government to make protecting our local koala populations a priority, but so far we have not received any support.

“The fact that Koalas will indeed become extinct in the wild if we don’t urgently stop destroying their habitat is not debated by the Government’s own scientific community.

“Have our elected leaders already forgotten about the thousands of koalas which perished in the bushfires?

“Their silence on protecting this extremely vulnerable Aussie icon is deafening.”