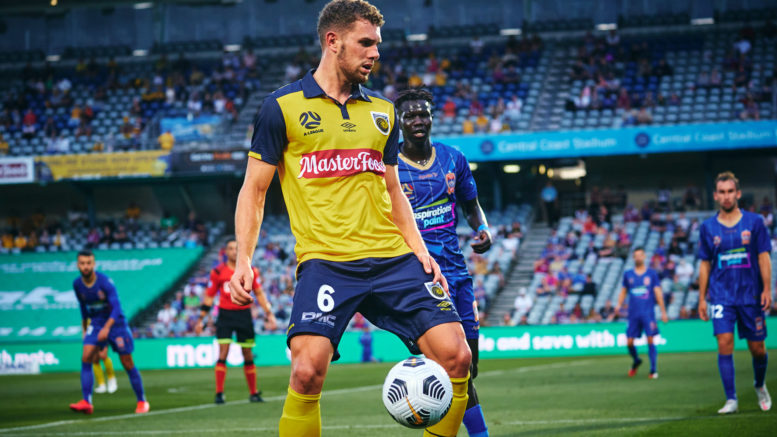 Gianni Stensness has been a mainstay of the Mariners’ midfield since arriving in 2019 Photo: Central Coast Mariners

Two years ago, the Mariners launched the Yellow and Navy Foundation, the primary function of which was to provide opportunities and pathways for young players.

This focus, combined with the club’s philosophy to provide opportunities for young players, is beginning to deliver results for the Mariners at A-League level.

After a year in which the Club’s NPL First and Under 20’s Men’s Academy teams were both crowned Premiers and Champions, a number of Mariners’ Academy youngsters are now really making their mark in the A-League team.

Alou Kuol made just his second A-League start two weeks ago after another impressive NPL campaign and scored the winner for Alen Stajcic’s side in the F3 Derby, before providing plenty of impact in the first 45 minutes against Macarthur.

The youngster was given a scholarship by the Yellow and Navy Foundation and moved up to the Coast from Shepparton in 2019, and after impressing at youth level, began training a few sessions a week with the A-League squad at the beginning of 2020.

In addition, Mariners’ Academy graduates Gianni Stensness and Joshua Nisbet have played nearly all minutes so far this season, while Lewis Miller and Max Ballard have both come off the bench to make meaningful contributions when asked to do so.

In another mark of recognition for the calibre of the Mariners’ Academy, Sam Silvera completed a transfer to Portuguese Premier League team Pacos Ferreira, while Matt Cahill has been loaned out to Southern District FC in the Hong Kong Premier League.

Mariners’ Academy sponsor, Anton Tagliaferro, said the opening matches and performance of the youngsters is a great step to solidify the Mariners’ position as the premier club for nurturing youth in Australian Football.

“The Mariners have a rich history in this frame, having previously provided opportunities for players like Maty Ryan, Trent Sainsbury and others who went on the have great careers in bigger leagues overseas,” Tagliaferro said.

“The club has always had a tradition of creating great ‘Coasties’ and many of these players reached great heights in their careers by going on to play in some of the biggest Leagues overseas and for the Socceroos.

“I am really happy to be involved with the Mariners’ Academy and to work closely with Mike Charlesworth and the football staff at the club as the club looks to identify, nurture and develop young talent and to give these boys the best chance possible to carve out a professional career in football.

“I have always maintained that the next Kewells or Vidukas are out there and it is our job to try and identify these players, offer them a spot at the Academy and then provide good developmental opportunities and a pathway for them.

“I must say a big well done to Ken Schembri, our Head of Football, for doing such a great job in leading and co-ordinating our Football Program.

“Ken, along with Head Coaches, Alen, Nahuel, Nick and Sergio, deserve huge credit for doing such a thorough and professional job with our young players and it is a real pleasure for me to work with and be associated with such a great bunch of professional and dedicated coaches.”