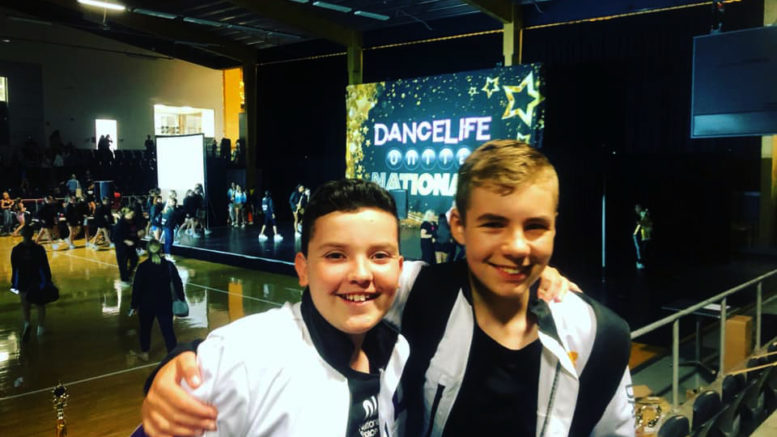 A dancer from Killcare was part of a team which tapped its way to glory at a tap dance competition at Sydney’s Olympic Park recently.

Macyn Van Borssum and his team from Darren Disney Dance scooped up the top prize at Dancelife Unite’s championships on January 20.

The all-boys team, with an age range of 12-18, won its division with a 97.5 per cent score and then won the competition’s Most Entertaining Routine award for its performance.

The nine tappers were then asked to take on troupes of 40 to 50 in the overall national championships division the next night.

Their a capella performance was awarded the highest honour at the competition, as they brought home gold with a final score of 99.9 per cent.

Macyn’s Dad, Greg Van Borssum, said he was immensely proud after the team ran out as winners.

“Their performance was flawless; there are some amazing tappers in the group,” Van Borssum said.

“It was awesome work … we were ecstatic!”

The 13-year-old dancer has been tapping from the age of two.

“Macyn has won a lot of local level competitions in tap but this is his first major one,” Van Borssum said.

“He just started tapping on his own, doing his funny foot things … he’d do it in his Uggs, in his flipflops.

“I took him to Darren (Disney) when he was about six, and it was like watching a baby learn how to walk.

His instructor, Darren Disney, is one of the original Tap Dogs and cites Wednesday’s win as his school’s first ever overall win.

“I’m so proud of each and every one of you, achieving such a high standard with awesome leadership and choreography by Kurt Dawson,” Disney said in a social media post.

“Holding our own at this phenomenal competition level is a dream come true.

“A fantastic week of competition with all our groups, some competing for the first time – well done everyone.”