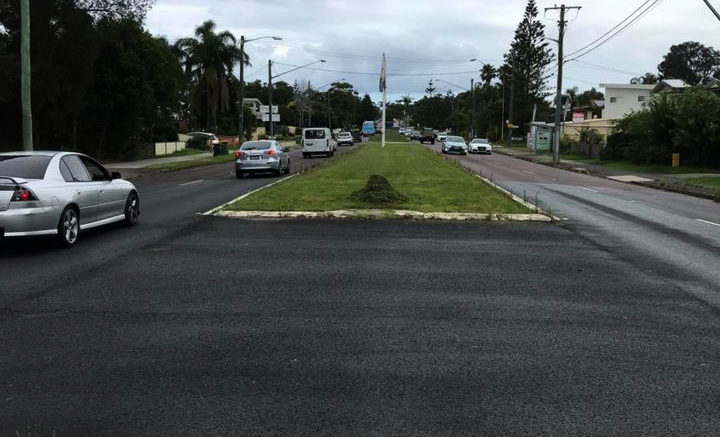 The Entrance MP, David Mehan, said he couldn’t take the unkept appearance of Long Jetty any more, so he got out his own lawn mower.

“At this time of year and with more people visiting our region due to border closures, we should be showing visitors our best face, but instead, all they get is weeds,” he said.

“It took me an hour and half, as the weeds were so high, and I’ll maintain this spot until Council gets its act together.

“Administrator, Dick Persson, said services would be maintained, but it looks like essential services are being cut.

“It’s so aggravating that when Council has to cut the budget, they cut it from the outdoor staff, and they don’t seem to have a maintenance program in place.”

Mehan said people were noticing the overgrown and poor state of the area all over the Coast.

“Killarney Vale shops are a disgrace at the moment.

“There used to be a lovely garden and when I first moved here one of the things that stood out to me was the landscaped roadway along Wyong Rd, but not anymore, it’s just a bunch of weeds,” he said.

“There’s no obligation on anyone to mow the verge outside their house, but they still do it because it’s civic pride.”

Mehan said getting Council to remove weeds from main roads was one of his priorities for 2021.

A spokesperson for Council said significant steps had to be taken towards financial recovery which have included a review of its daily operations and a reduction of staff resources across the organisation.

“The re-prioritisation, coupled with wet and warm conditions during the Council shutdown over Christmas / New Year, has resulted in increased vegetation growth across the Coast.

“Council takes pride in maintaining our open spaces the best we can for our community.

“Community members who contacted Council over the shutdown period are currently being responded to and we thank them for their vigilance in letting us know of areas that need maintenance.

“It is the responsibility of residents to maintain the footpath out the front of their properties.

“For Council-managed roadsides, reserves, median strips and so on, there are strict maintenance requirements that Council must uphold as stipulated by Transport for NSW and other agencies, including but not limited to, approved licences, approved risk assessment plans, lane closures, approval of time of works and correct personal protection equipment.

“Due to significant health, safety and legal risks, Council strongly urges the community not to mow these areas themselves,” the Council spokesperson said.