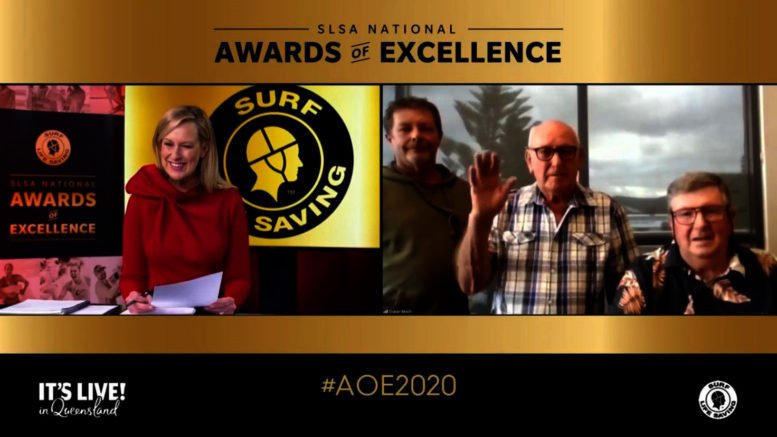 A lifesaving trio from the Peninsula have been recognised for their bravery during an incident which occurred more than 45 years ago.

They were presented with Surf Life Saving’s Meritorious Award at the SLSA National Awards of Excellence event held in November.

Two members from Ocean Beach Surf Club and one from Umina Beach were recognised for their service via livestream at the November 7 event.

The award aims to recognise acts of bravery by members who have put their own lives on the line to rescue people in trouble in the water.

The trio received the Group Certificate of Merit with Bronze Insert following a dangerous offshore rescue in 1974 at Broken Bay.

Former member of Ocean Beach Surf Club, Keith Pope, said although this event was a long time ago, he believes feats of bravery should be recognised.

On a Sunday morning in May 1974, a group of trainee offshore rescue boat drivers were alerted to a pleasure craft experiencing difficulties just off the entrance to the Hawkesbury River.

Pope, Doug Barrett and Graham Troth volunteered to head out in the offshore boat to help guide and tow the craft to safety.

As they headed towards Palm Beach, a storm blew in with harsh rain, waves averaging nine metres high and fierce winds of over 160km/h.

Pope said the three were on high alert for large breaking waves as they tried to protect their eyes and keep a lookout for the troubled craft.

“We were being propelled 10 to 15 metres in the air through 180 degree turns, before crashing back into the water, only to have Doug swing us around and attack the huge seas once again,” Pope said.

“There was never any suggestion of going back.”

After making it through the storm into the lee of the headland, Pope said they found the distressed craft, which had a family on board, being safely escorted by a police boat.

Their return journey to Brisbane Water proved more hazardous as large waves crashed over the boat leaving them bouncing around in white water.

Pope said he was very nervous and frightened at this point and will never forget Troth’s comment: “You know why they give us these life jackets, don’t you? So they can find our bodies.”

The trio eventually made it to safety as they turned into Brisbane Water and headed back to the boat ramp.

Pope said he was moved to share this story after seeing a similar event occur with the two life savers on duty ending up losing their lives.

“I always have been appreciative of having two experienced surf lifesavers with me that day – Doug was fearless,” he said.

“Doug has now passed on and I would like some acknowledgement for [him] as he was a good bloke, and a good and selfless lifesaver.”

Lifesavers in the making