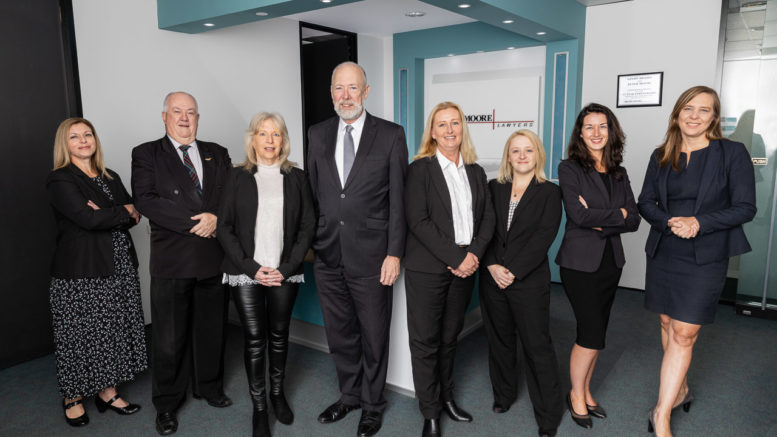 Geoff Brazel (centre) with the team

One of Gosford longest-running law firms, Brazel Moore Lawyers, is celebrating 40 years of practice, after being established in 1981 by Geoff Brazel and Peter Moore.

In the beginning, Brazel and Moore were the only two people in the firm.

Brazel said the two got to know each other during evening lectures at Sydney University, where from 1974 to 1978, they both studied law part-time.

“It is quite amazing when you look back,” Brazel said.

“When Peter and I kicked off, we did not employ any staff.

“We did our own typing and answering the phones for the first two years until that got beyond us, and we employed our first member of staff.

“Our second member of staff, who we employed not long after that, is still with us, so she has been with us for 37 years.”

Brazel said they “took a giant leap” in 1986 when they purchased their first computer.

“We also purchased a word processing program at the time, and in those days, Word Perfect was the big program that everyone used,” he said.

“We had one machine, so we used to take turns ‘processing’, as it was called.

“I remember the guy who sold it to us said that the 256MB was more memory than you will ever need.

In those early days, if both Brazel and Moore were both in Court, they would put a sign on the door to let clients know when they would be back.

Brazel said Gosford is now a different place than it used to be.

“It was a smaller place than it is now, we actually had a retail centre in the middle of Gosford before Erina Fair became a thing,” he said.

“The old courthouse, which is now the Conservatorium of Music, was the main courthouse for the district court, and a local court sat in the building across the road on the corner of Mann St and Georgiana Tce.

“It was quite different then, and we only had one magistrate who used to do a circuit between Gosford, Woy Woy and Wyong.

“These days there are three separate courts, Wyong has two magistrates, and Gosford has two.”

In 2020, Moore retired from the practice, and now Brazel continues to lead a team of six solicitors, five paralegals and 13 support staff, and deals with over 15 areas of practice.