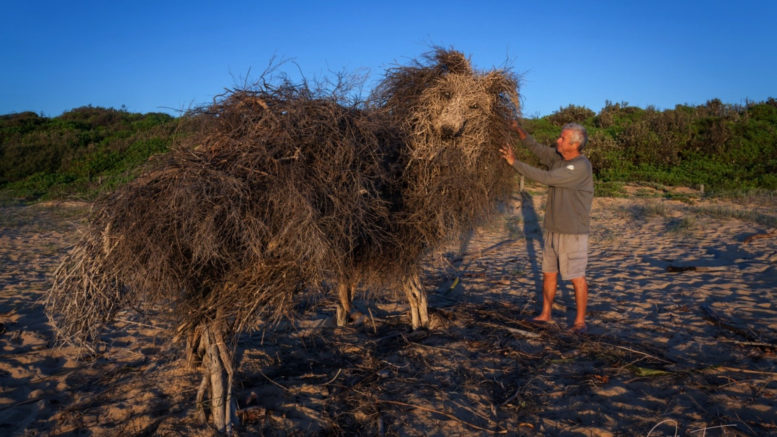 His many works of art, erected during months of social restrictions last year, have been acknowledged for their positive impact on tourism and the mental health of the community.

A Council spokesperson confirmed Rush was identified in August 2020 as a successful applicant for Council’s Creative Art Central 2020 program.

“Staff have been working with him to finalise his creative summer program that coincides with the Coast’s peak tourism season,” the spokesperson said.

“The project is part of Council’s Cultural Plan which identifies local artists and helps them deliver community-based projects that promote the Central Coast as a progressive and creative region.”

As part of his deal, Rush is required to complete at least three sculptures over the next two months on any beach on the Central Coast.

The news couldn’t have come at a better time for Rush, who has received no financial assistance for the many sculptures he has completed so far.

“It got to a point where I thought I would have to go back to work, start paying bills,” Rush said.

“But just when I had done what I thought was the last one, they pulled through, which means I can continue.

“I am very impressed and grateful to the Council.

“I understood the pressures the Council had, but through support from the Arts and Culture Worker, Jonathon Gilbert, and some of his colleagues, it was pushed through.”

Rush said his official title was Artist in Residence on the Beach.

“They (Council) have been so great, and it is all up to me on what I want to do,” he said.

His latest creation at Spoon Bay is a tribute to a collie dog called Arlo which is owned by a White Island Volcano survivor.

“Stephanie Browitt was on TV, and she was coming home from the hospital after six months with the burns mask to see her dog, Arlo, for his birthday,” he said.

“It was the most beautiful footage because you would think, to a dog, Stephanie would be unrecognisable with the burns mask.

“But Arlo recognised her, and he was all over her.

“It was just an amazing moment, and it really spoke about the connection between dogs and humans.

“I am always looking for animal-themed things for ideas, and I thought it was worth a tribute.

“It’s not a portrait of Arlo as such, more a tribute to him.

“It’s as much of a collie dog as I could make it.

“Collies need white on them to be distinctive, and there is nothing white on the beach I could use.

“I did have the dog turning its head to look across the ocean towards New Zealand.

“I am sure that the dog knew something was up, that maybe Stephanie was in trouble, so I was trying to capture the moment.”