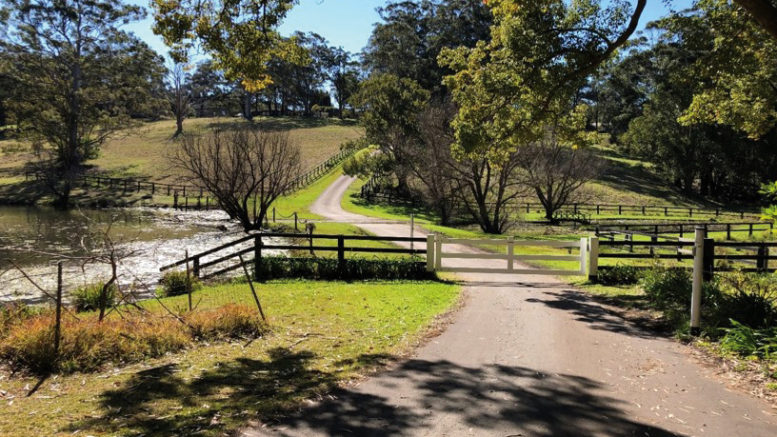 The proposed development site at Kincumber

A new proposal for a caravan park development on land formerly occupied by Bangaloe Stud at Kincumber has raised a red flag for members of the Kincumber and Picketts Valley Community Action Group (KPVCAG).

Plans for an over 50s manufactured housing estate comprising 202 houses and accompanying buildings on the 24ha site were unanimously rejected by the Central Coast Local Planning Panel last August following a major protest campaign spearheaded by KPVCAG and a recommendation for refusal from Central Coast Council.

The $19.7M project, Choice Living Avoca, was refused on a number of grounds, with the panel saying it was inconsistent with the area’s E4 Environmental Living zoning, would have resulted in additional stormwater run-off and increased downstream flooding, would have impacted the ecological values, visual and scenic quality of the area and would have been an overdevelopment of the site.

Documents lodged with the application say consent is also sought for: the construction of a recreational area for mini golf, tennis and horse riding; a community centre; an amenities building; and a manager’s office.

The development would also involve internal private roads including the intersection onto Avoca Dr, bulk earthworks/regrading and retaining and landscaping.

“The development is proposed to be used as a tourist park with draw card amenities and recreation facilities,” the documents say.

“The site will accommodate short stay visitors where stays will be limited to 180 days in any 12-month period, and long stay visitors/residents.”

The community centre would include a kitchen, bathroom, pool, seating, barbecue area and parking and landscaping would include riparian revegetation, a fenced dog park, bushwalking tracks including a canopy walk, an exercise circuit, a playground and a jumping pillow.

But KPVCAG President Graham Murray says the new proposed development still poses many of the original reasons for earlier refusal.

The community had concerns over a range of issues, he said.

The proposed de-watering and filling in of a large dam would place the habitat of local fauna including the endangered Green Golden Bell Frog at risk as well as creating the potential for storm water pollution within the Avoca Lagoon catchment, he said.

Residents are also concerned at the potential loss of 210 trees (including 80 threatened species).

They question whether or not the proposal meets with the local character of the area, or the intent and integrity of the E4 zoning which is for sensitive low-impact rural development.

There is also concern over the proposed widening of a bush trail from Picketts Valley Rd to 4m to allow for entry and exit of vehicles, Murray said.

“This will threaten the precious green wildlife corridor with connectivity from Kincumba Mountain to Bouddi National Park,” he said.

The full proposal for DA60468/2020 can be viewed on the Council website with final submissions/objections due by February 22.

More than just a recycling centre