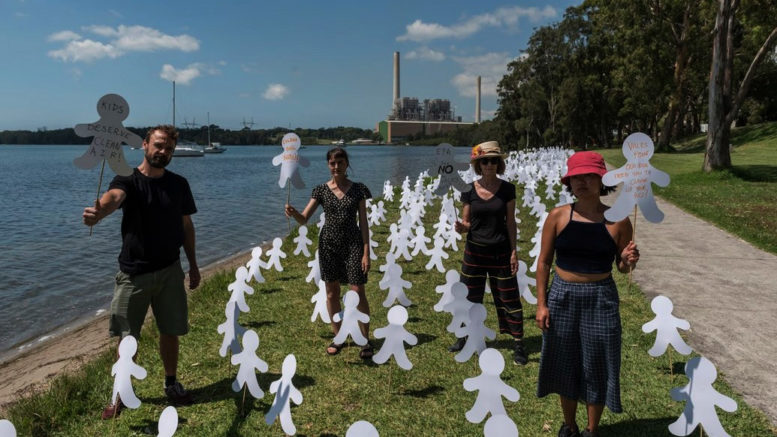 A new local environmental group, Future Sooner, and the Nature Conservation Council of NSW, have stepped up their community awareness campaign about the health risks of toxic emissions from the coal-fired Vales Point Power Station.

Delta lodged its application on December 23, 2020, requesting that Vales Point continue to be exempt from the Group 5 nitrogen oxides emission limits set out in the Clean Air Regulation and instead to continue to operate at the higher emissions limit approved by the EPA.

Vales Point Power Station is considered to belong to Group 2 when it comes to limits for emissions of nitrogen dioxide and that Environmental Protection Licence is due to expire on January 1, 2022.

Delta is seeking to extend the period of time that Vales Point remains within Group 2 for a further five-year period.

Company Secretary, Steve Gurney, said that in making this application, Delta was in no way requesting that it be exempt from any emissions regulations.

NCC Community Organiser, De Brierley Newton, said that if Vales Point was in the group it should be, Group 5, then under NSW emission standards, it would only be allowed 800 mg/m3 nitrogen dioxide emission and would not ever be allowed to exceed that.

On Monday, January 18, Future Sooner and NCC placed hundreds of child silhouettes along the Lake Macquarie foreshore in front of the power station at Mannering Park, to visualise the impact of the number of children they claim are affected by asthma from emissions.

“We know that asthma is a common childhood problem and there’s about 12,000 children in Lake Macquarie and Central Coast local government areas who have asthma, and about 650 of those we can attribute to the nitrogen oxide from various power stations,” he said at a press conference on Monday.

“We’ve come to this conclusion by applying how dangerous we know nitrogen oxide is to the number of children that we know have asthma, and the concentrations of nitrogen dioxide in the air locally with the power station being the dominant source.

“The good thing about this is that it is all entirely preventable and the power stations could be installing scrubbers to reduce the nitrogen dioxide going up the chimney.

“Eraring Power Station has recently put in low-nitrogen dioxide furnaces, I understand, which has half dealt with the problem there, but Vales Point hasn’t done any of that kind of work.

“We are calling on the EPA to tighten the Licence conditions to require these power stations to put in modern pollution controls.

“There’s a stricter licence condition that should apply to Vales Point Power Station, but it’s had an exemption that was granted for five years, 10 years ago, and extended again for another five years.

“Now they’re asking for yet another five years exemption from the conditions that normally apply.

“The main pollutants of concern are the nitrogen oxides, sulphur oxides and particles, but while the particles are quite well dealt with by the filters when they’re working properly, the oxide gases are being released in an unregulated fashion,” Dr Ewald said.

Future Sooner spokesman, Will Belford, said his group and the NCC was calling on the EPA to not grant the licence and instead made the owners of Vales Point clean up pollution control.

“The two owners of the power station, Trevor St Baker and Brian Flannery, who bought it from the State Government for $1M in 2015, and last year reported $60M in dividends, so there’s clearly an opportunity and the means for them to install whatever is required to clean-up emissions, so they don’t need this exemption for the next five years,” Belford said.

“Why should these people be granted an exemption when they have the capacity to clean up this power station and operate it at the same level as all the other ones.

“The power station has already been slapped with a $30,000 fine for twice breaching its exemption licence.

Hunter Community Environment Centre Co-ordinator, Jo Lynch, said exemptions like that which Delta Electricity has applied for undermine regulations intended to protect the environment and the public.

“Despite being a serial polluter, the Vales Point Power Station has been the recipient of special treatment with Federal Government funding to keep it running, but there should be no leniency shown by regulators or government when it comes to limiting pollutants that can harm the health of nearby communities,” she said.

Delta Electricity has strongly rejected the claims by NCC, labelling them as factually incorrect and deliberately misleading.

“The NCC is a group of anti-coal activists with one objective; to shut down coal fired power stations,” Gurney said.

“Delta’s Environmental Protection Licence was renewed by the EPA in July 2020 after considerable input from the community and other groups.

“Notably, limits for emissions such as of oxides of nitrogen have already been tightened as part of this renewal process.

“Delta continues to comply with these reduced limits and further work will be undertaken in upcoming maintenance outages to replace burners which will result in even greater reductions.”

Gurney said environmental data, as required under Delta’s licence, is posted on Delta’s website monthly for all to see.

“Independent EPA analysis consistently shows that air quality on the Central Coast and Lake Macquarie is very good and among the best in NSW,” he said.

“Specifically, monitoring has shown that nitrogen dioxide concentrations were either very good or good at all monitor times,” Gurney said.

The EPA is expected to deliver its decision by February 21 and a spokesperson said the application would be carefully considered in accordance with the EPA’s statutory obligations.

The spokesperson said the application was “commercial in confidence” which means it is not open for public exhibition but part of the EPA’s assessment process would determine whether community consultation was necessary.