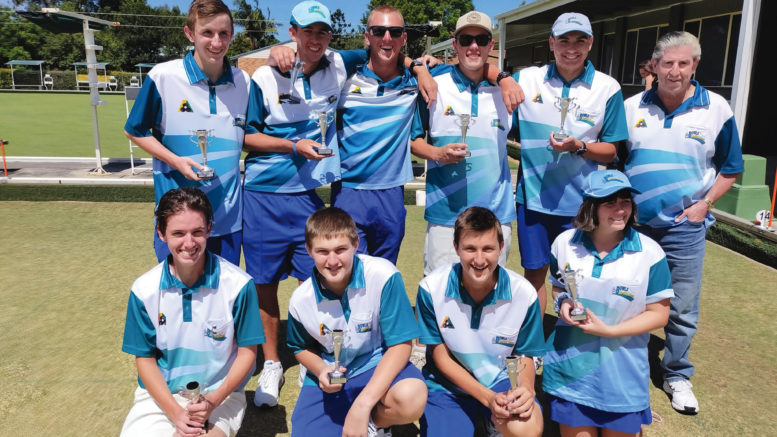 Two outstanding wins have marked the calendar of Bowls Central Coast on Sunday, January 17, with two prestigious accolades brought back to the Coast.

Both the Opens and Under 25 teams won gold in their respective tournaments after strong showings by Central Coast club members from Ettalong to Lake Munmorah.

The Opens side were competing in the John Smith Shield against teams from Newcastle District (Zone 2), Hunter Region (Zone 6) and Manning District (Zone 11), held at East Cessnock.

The Central Coast side consisted of four teams.

Nathan Mallay, Shane White, Zac Robertson and Lee Trethowan, all from Ettalong, made up Team One.

The Shield was set up for each Zone to face each other once in three consecutive rounds.

These two sides faced each other in Round Three, after both winning again in Round Two.

The Central Coast did the greater damage and won the round on 2.5 rinks, securing 9.5 points.

In the end, Central Coast earned an overall total of 25 points, four points clear of Manning District in second place.

The Under 25’s competed in the U25 Metropolitan Series played at Wyong against Newcastle District, the Greater Western Sydney region (Zone 5) and Sydney North West (Zone 10).

The Metropolitan Series was broken into three rounds, wherein each team would face  each other in a game of pairs, triples and fours.

An early lead by Newcastle in the first two rounds against the two Sydney sides shot them up to 10 points.

Central Coast drew with Sydney North West in Round One then beat Greater Western Sydney in Round Two, placing them 3 points behind Newcastle.

In the end, it came down to the Round Three match-up being the classic Newcastle – Central Coast derby.

In a stunning performance, the lads from the Coast pulled out all six points to top the table by a three point lead.