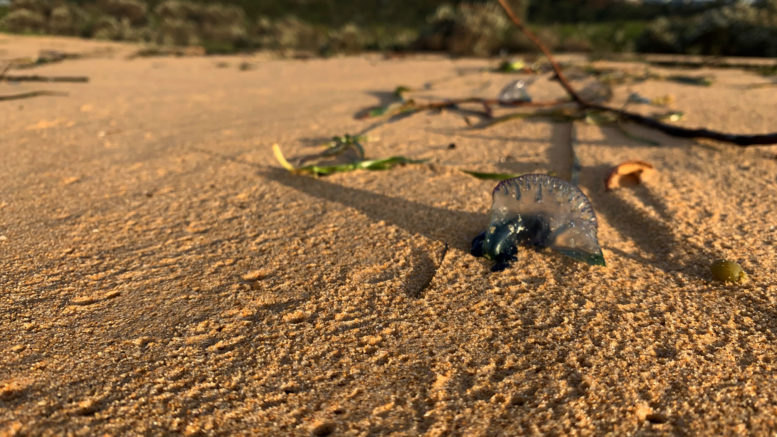 A smack of bluebottle jellyfish has hit Central Coast beaches over the past week, causing major inconvenience for beachgoers.

On Saturday, January 9, many beaches became covered with the small blue stingers causing many to avoid swimming in the water despite hot temperatures.

One young lady at Killcare was hospitalised due to a severe reaction to multiple stings.

“On Saturday we saw bluebottles on south-facing beaches because they arrived via the northeast winds and then were blown backwards with the southerly,” Cusack said.

“They came in masses, which was not great.

“There is no guaranteed location on where they will hit the worst, but when they do come in the masses, they hit everywhere.”

The Jimble jellyfish, which is related to the Box jellyfish, has also been causing problems, specifically around Terrigal.

While Jimbles are not life-threatening and are far less potent than their deadly relative, they can still deliver a painful sting.

Cusack said one of the best treatments for a Jimble sting seems to be vinegar.

“We get a lot of Jimbles, more so at Terrigal, and they are nasty little buggers,” he said.

Bluebottles, also known as the Pacific Man-of-War in the Pacific and Indian ocean, are not actually single organisms, but a colony of four kinds of highly modified individuals (zooids).

These zooids are dependent on one another for survival.

“The treatment for a bluebottle sting is to remove the stinger with your fingers because they don’t seem to affect people’s fingers as much,” Cusack said.

“Flush the area with a large amount of cool water or even seawater to make sure all the stingers are off the skin.

“Then immerse the limb in water as hot as tolerable for up to 30 minutes.

“If it calms down and becomes just an itch, cold press works well then as well.

“If this doesn’t help and the patient is getting worse, seek medical assistance from the hospital.

“If there are no bluebottles in the water and there are signs up, go and ask the lifeguards if they are still around as they may have been there early that morning.

“My best advice is that if they are around and you don’t want to be stung, I would not swim.”