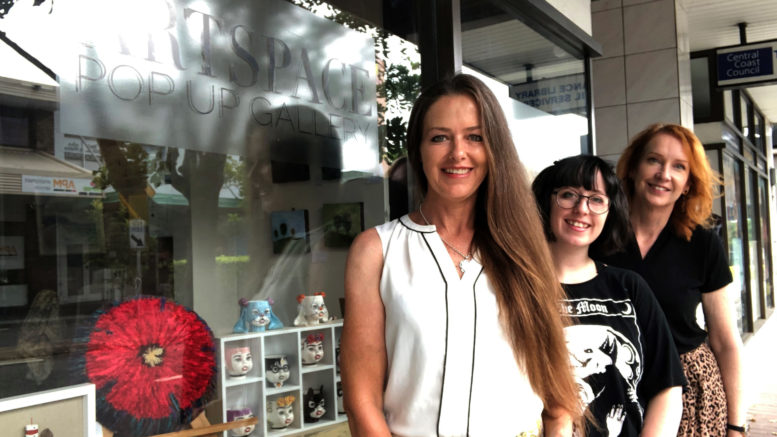 A new creative hub and gallery space is set to bring a new wave of creative culture to The Entrance.

Artspace Pop Up Gallery opened in the vacant shop next to The Entrance Library in late December as part of Central Coast Council’s Creative Community Program and is now poised to deliver an exciting and vibrant cultural program over the next six months.

Tammy Briggs, Cheryl Bruce and Jess Sylvester are the creative trio behind the space and believe that nourishing the creative soul of The Entrance through exhibitions, workshops, demonstrations and community events will help reinvigorate the suburb and drive new interest in the area from creatives as a potential place to live, work and play.

It’s a vision akin to the artisan fuelled revitalisation of Long Jetty and according to Briggs, the space will revolve around local artists and makers, giving them opportunities to exhibit and sell their work, engage with the public and promote themselves.

Briggs said that despite having a diverse and multifaceted artisan community, the Central Coast was lacking in creative spaces and believes initiatives like Artspace are not only needed to fill the void, but that they also act as catalysts for growth in the communities that embrace them.

“There are so many artists here on the Coast who just have nowhere to go to exhibit and to engage with the public, which is so important to developing yourself as a confident artist, so that’s why we believe Artspace is going to be hugely successful.

“Build it and they will come is my motto, and I think that by bringing this space to The Entrance, we can really help give our local arts community a sense of hope after the pandemic, and also bring a lot of opportunity to the local business community by attracting new demographics into the area and letting them see its potential firsthand,” Briggs said.

“The reaction from people coming in has just been pure joy and all of our upcoming workshops have already reached over 95 per cent in bookings, so the hunger for an offering like ours is pretty clear.

“Although our initial lease is only for six months, our end goal is to become a permanent fixture of The Entrance.”