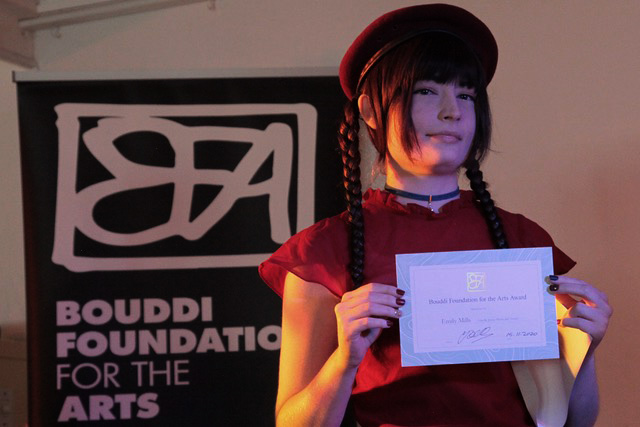 Six budding young creatives from the Peninsula were recognised at this year’s Bouddi Foundation for the Arts Awards event held on Sunday, November 15.

Acclaimed actor John Bell presented each artist with a grant certificates which is set to help the students develop their craft.

It was a big win for creatives from Phegans Bay with two recipients receiving recognition, one for her work designing dramatic props for theatre.

Zali Kassi is set to embark on her studies at the National Institute of Dramatic Art in prop-building.

Singer-songwriter Ruby Archer from Phegans Bay was awarded the ORiGiN Music Publishing award for her progress in the recording studio, before performing at the awards show.

Another songwriter was also recognised at the event.

Established by the foundation through a community appeal, the inaugural Narelle Jones Memorial Award was presented to Emily Mills for her song writing work.

The Woy Woy songwriter will receive financial support for her work in developing an EP and in marketing and promotion.

This year’s event at Wagstaffe Hall marked the 10th anniversary of the awards program with more grants available to creatives than ever before.

A photographer from Killcare received a grant to help fund his first solo exhibition set to feature images from a photoshoot in Japan.

Jai Bloomfield said his next photographic trip will be to outback Australia.

Hardy’s Bay writer, Lily Cameron, received recognition for her magazine work and writers’ antholgoies with the Allen and Unwin Award for Creative Writing.

Cameron is set to complete her Bachelor of Communications Degree this year and will then pursuer her Master of Arts in Creative Writing.

Amber Lynch, a young dancer from St. Huberts Island, was recognised for her dedication to dance studies.

After suffering an injury earlier this year, Lynch was no longer able to travel to Munich for her studies and has now set her sights on New Zealand.

Local young artists aged 15-24 can apply for next year’s grants with further information to be announced in March on the Foundation’s website: bouddiarts.org.au.