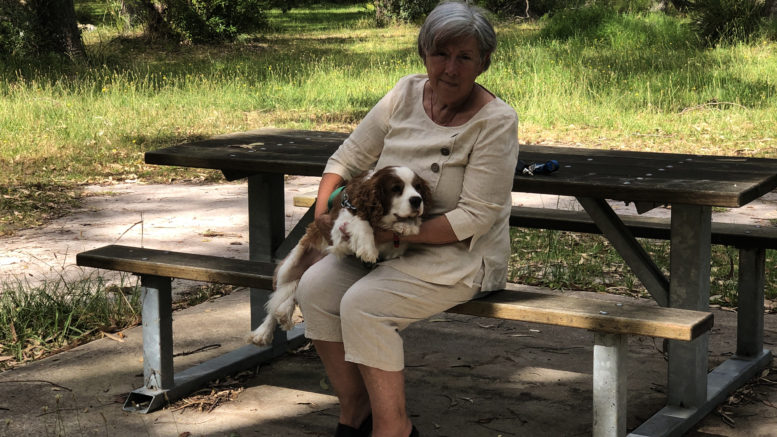 They may be man’s best friend, but would you risk becoming homeless for your dog?

For Lake Munmorah’s Jen Sadler, the answer is yes.

The 68-year-old Lakeside Leisure Village resident has been locked in an ongoing legal battle with village management over her Cavalier, Shilo, and fears that she could be without a roof over her head come Christmas if the matter is not resolved favourably.

According to Sadler, the issue came to a head when her previous dog died in March.

Longing for animal companionship to help manage her severe depression and anxiety, Sadler applied to village management for approval to bring in a new dog, but was not given the necessary permissions due to the village’s community rules, which stipulate that residents may not acquire new pets following the death of a previous one.

Having already made arrangements to adopt Shilo from a rescue facility, Sadler took the village to the NSW Civil and Administrative Tribunal to contest the matter, with the Tribunal ruling in favour of the village.

Unwilling to part with Shilo, Sadler disregarded the order to re-home her new dog, instead choosing to explore the possibility of vacating the village, with Lakeside now preparing to take her back to Tribunal over it.

Sadler said the situation had left her feeling mentally and emotionally drained.

“I feel like I’m living on a knife edge.

“I have informed management that I am prepared to sell my house and leave, and have already started the selling process, but they won’t give me the time to do that.

“I’m a single age pensioner so I can’t afford to rent elsewhere.

“I lost both my brothers to suicide, I don’t have any immediate family in the area, and I don’t have a support network, so even if I wanted to rehome Shilo, I can’t.

“What Lakeside is doing to me is just cruel.

“I’ll end up living in my car at this rate,” Sadler said.

But according to village management, Sadler had brought the situation on herself.

A spokesperson for Lakeside Leisure Village said that all residents were made aware of the rules regarding pets when they signed their lease.

“When new residents move into the village, we allow them to bring in their existing pet if they have one, but our rules prevent replacing a pet when it passes away.

“This is communicated in at least two documents prior to new residents moving into the village.

“It is also reiterated upon signing the lease agreement with the village.

“We also have residents sign a pet agreement acknowledging the no replacements clause.

“The Tribunal ruled that Ms Sadler obtained the dog without permission and that our community rules be upheld.

“Allowing her to keep the dog is inconsistent with the recent Tribunal findings and we note that Ms Sadler was the one to take us to Tribunal without waiting for the matter to be heard before she obtained a dog anyway.

“Ms Sadler has not been the victim here but is actually retaliating against the village because she cannot get her own way,” the spokesperson said.

According to the spokesperson, that retaliation has included some alleged nasty behaviour from Sadler, who they say ripped signs off buildings and tipped over outdoor furniture and pot plants at the onsite office.

“Ms Sadler has also verbally abused one of our managers and threatened to stab our caretaker,” the spokesperson said.

The spokesperson also clarified that management had made no moves to evict Sadler from the village at this point in time and added that they were under no obligation to take her mental health problems into consideration during dealings at Tribunal.

“Ms Sadler’s mental health issues are known to us, but we are an independent living village and do not, nor are we obligated to, provide her with any mental health support.

“We are not medical professionals, we are landlords.

“We have shown her leniency with her financial problems with paying site fees in the past and set up a Centrepay system for her, as she is a long way behind in her site fees, which she has recently cancelled as well.

“So now she is not only going completely against the agreements made by her but is also not paying her site fees.

“We have been very patient with her for the past six years of her residency, but she is being extremely difficult.

“Ms Sadler has not been evicted, but if she doesn’t reinstate her Centrepay or pay her site fees in another way, we will have to terminate her lease and ask her to remove her house from the site, or actively sell.

“This will all of course be done legally through the Tribunal.

“Ms Sadler has left us no choice in the matter,” the spokesperson said.

When asked about giving Sadler some leeway to sell and vacate on her own terms, the spokesperson said village management did not believe she was making a serious effort to sell.

“Ms Sadler put her home on Gumtree for a short time, but it has since been removed.

“She does have a small for sale sign on the house but has not listed it with an agent for sale,” the spokesperson said.

“The dog was replaced before they won in Tribunal as I really thought we would win and I was staying home and crying every day as I was so depressed and lonely,” Sadler said.

Sadler said her home was currently listed for sale on Facebook Marketplace and that she was in the process of arranging a real estate agent.

She denied allegations of threatening to stab the village caretaker.

The matter returns to the NSW Civil and Administrative Tribunal on December 16.