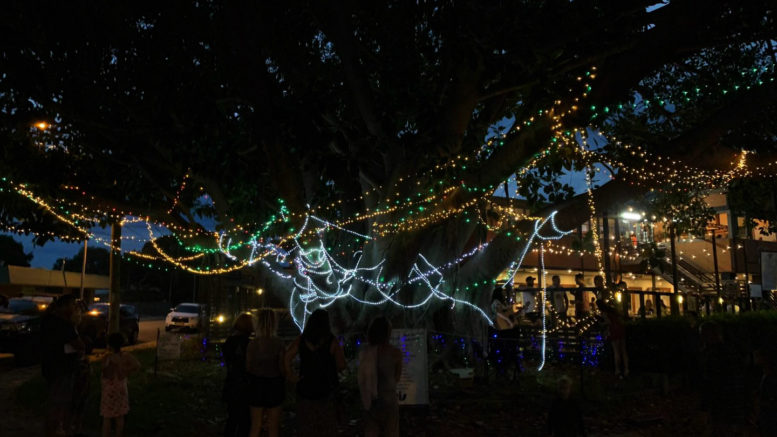 The ancient fig tree in the heart of Budgewoi’s Eastern Village has once again been transformed into a twinkling beacon of hope, with the lighting of the fifth Budgewoi Tree of Dreams.

The annual event is held to raise awareness of the impact of suicide and to spark important conversations around mental health and suicide prevention amongst the community.

“When we lost Sarah, I was devastated.

“It was a real shock because I had no idea that she was struggling like that,” Skinner said.

Determined to do something to honour her friend’s memory and to help others struggling with their own mental health, Skinner approached Wyong based suicide prevention charity, Iris Foundation, for help, and the Budgewoi Tree of Dreams was formed.

Aglow with hundreds of lights, the tree is also adorned with tags of hope, special messages of hope, remembrance and support that are hung in the tree to bring together those impacted by suicide.

Sparkling to life over the first weekend of December, Skinner said this year’s campaign had been the most successful one yet.

“This year’s campaign has had the biggest response from the community we’ve ever had.

“All the lights were donated by local businesses and community members and we had a small team of people come down on the first day to help hang them.

The Budgewoi Tree of Dreams will be lighting up evenings until December 31.

“It has been really touching being involved in this project and seeing the interest from the community, which is why I would love to see as many people come down and see the Tree of Dreams, take a photo with it and help spread the word to the wider community,” Skinner said.