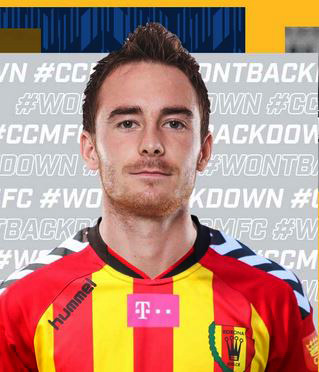 The Central Coast Mariners have announced a major departure and three acquisitions, with the club parting ways with Ziggy Gordon while welcoming Michal Janota, Stefan Jankovic and Jaden Casella into the fold.

On December 17, the club confirmed Gordon’s departure as well as Janota’s signing, as the Mariners enter their final preparation period before season 2021 kicks off in Gosford on New Years Eve.

In making the announcement, the club confirmed that it had granted Gordon a release from his contract at his behest.

It’s a loss that is likely to hurt the Mariners’ preseason planning, with the Scottish defender having been a core member of the squad throughout the entirety of last season, but Janota’s signing is just as likely to have an impact, with Mariners Head Coach, Alen Stajcic, excited about what the Polish attacker will bring to the Yellow and Navy.

“Michal is a player who we are very excited to be able to bring to the A-League, and he’ll add great depth to our attacking stocks,” Stajcic said.

“Having spoken to Michal and seeing vision of him play, we are confident that he can be a great addition to the team and make a difference for us up front.”

The former Feyenoord man has spent much of his career in Poland and the Netherlands before a recent spell in Saudi Arabia ended earlier this year.

Janota has played professionally since 2006 and in that time has proven himself equally adept at finding the back of the net himself and creating chances for others.

His 2018/19 season with Arka Gdynia saw him score 10 times and provide six assists through his 32 matches.

In the hours following the Gordon-Janota announcement, the Mariners also advised Jankovic and Casella had put pen to paper on 2021 contracts.

Hailing from OFK Beogard, Jankovic has spent his entire career in Serbia and will be another focal point for the Mariners attack this season.

The 23-year-old has also featured in many of the Serbian national youth teams, and has more recently played with Mariners youngster, Joey Jevtic, who headed to Serbia last season.

Casella has entered a scholarship deal after impressing during his preseason tenure with the Mariners.

The 20-year-old attacking midfielder was born in Sydney and spent time with Sutherland Sharks as a youngster, and more recently had a spell in Spain with Torre Levante and Mislata FC.