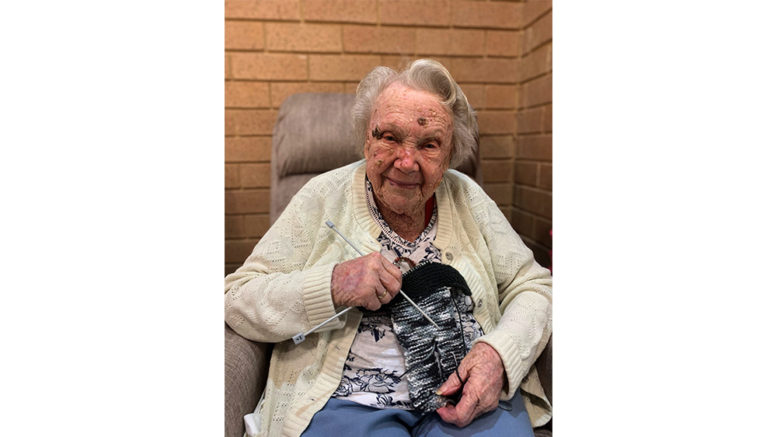 Sick children in Wyong and Gosford Hospitals have a reason to smile a little brighter over these holidays, thanks to local woman, Marjorie Dempsey.

The 97-year-old resident of Killarney Court Aged Care Facility has been busy knitting teddy bears to be donated to children at local hospitals just in time for Christmas.

Dempsey has knitted hundreds of teddies for well over a decade, donating them to charities such as Legacy, the Australian Red Cross and various hospitals.

Dempsey puts unique touches and love into each one.

“I always try to make the teddy bears different from one another.

“I feel this makes them a little more special,” Dempsey said.

Dempsey began knitting bears after her infant son received one while in hospital.

“My son was just five days old when he became unwell with meningitis and needed to be admitted to Camperdown Children’s Hospital, where he spent the next 18 months.

“One of the special memories I have is that he received a teddy bear that was donated, and it was a special comfort to us both.

“This is why making these teddy bears is so special to me,” Dempsey said.

Tragically, her son passed away from his illness, and from then on, Dempsey resolved that she would go on to create teddy bears for other critically ill babies and children to, as she says, “provide comfort and joy to those that receive them.”

Over the years, Dempsey’s efforts have gone on to do just that.

Despite never knowing who receives her bears, Dempsey has the knowledge that other families feel the same comfort she did.

Since moving to Killarney Court over seven years ago, Dempsey’s knitting has continued unabated, and supportive staff have ensured that she can continue her passion.

Despite being close to 100, Dempsey has no plans to stop knitting, despite it becoming more difficult for her.

“Although my eyesight is starting to make it a little harder for me to do, I will continue to make and donate them for as long as I can.”