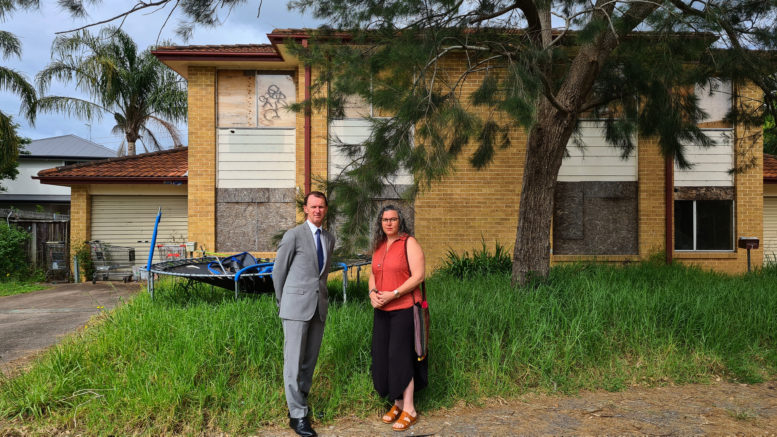 The Entrance MP, David Mehan in front of a boarded up public house

The Entrance MP, David Mehan, is calling on the NSW Government to come clean on its plan to privatise public housing in Bateau Bay, instead of blaming “termites” as the trigger.

Mehan had sought advice on one large duplex property at 5 and 6 Faye Cl, Bateau Bay which has been vacant for years.

It was first reported in the Chronicle on November 18 that the property had been vacant since September 2012 due to termite damage and had since fallen into a derelict state with smashed windows boarded up, the interior trashed and the grounds left to grow wild.

The NSW Land and Housing Corporation said at that time that the Bateau Bay property had been vacant for years because of extensive damage, including termite damage, which now would be repaired and then the townhouses would be sold.

Mehan says that since 2011, the State Government has sold several properties in the Bateau Bay social housing estate and neglected the maintenance of many more, including the townhouses in Faye Cl.

“I’ve written to the Minister for Housing, Melinda Pavey, requesting that the vacant houses at Faye Cl be repaired and remain as public housing.

“This Liberal Government is not interested in providing more affordable or social housing on the Central Coast,” he said.

There are 1,692 people on the housing register in the NN20 Wyong Zone and according to the latest Department of Community and Justice statistics, they should expect to wait at least 10 years for a studio/one bedroom property or a three-bedroom home, while it will take between five and 10 years for a two-bedroom or four-bedroom property.

The NSW Land and Housing Corporation (LAHC) says that it is constantly reviewing its asset base to actively grow and manage the largest social housing portfolio in Australia.

This includes identifying existing assets that are no longer fit for purpose which are then sold and/or recycled, to build new housing or to undertake capital upgrades.

“The 2020-21 NSW Budget includes more than $17M for maintenance and upgrade work at social housing properties across the Central Coast, including $793,000 to construct new and upgrade existing social and affordable housing for Aboriginal communities in Killarney Vale,” Crouch said.