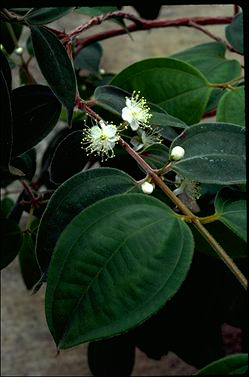 The NSW Department of Planning, Industry and Environment (DPIE) has renewed its appeal for Central Coast residents to be on the lookout for two local species susceptible to myrtle rust.

Landholders are asked to advise authorities, who are hoping to collect seeds from the threatened species, if they see them on their properties.

Both species belong to the Myrtaceae family (the eucalypt family) and are naturally occurring in rainforest and rainforest margins on the Coast.

Rhodamnia rubescens (scrub turpentine) has distinctly three veined leaves from the base, paler beneath and usually densely hairy.

It produces white flowers from august-September and fruits ripen from October-December.

They are ball-shaped and 5-7 mm in diameter, crowned with the remains of four calyx lobes and are red turning black when ripe.

Rhodomyrtus psidioides (native guava) is not three veined, but instead has a midrib and lateral veins but no vein running along the margin (edge of the leaf).

Its flowers (white) appear from November-December and fruits ripen from February-May and are either ball-shaped or egg-shaped and 10-15mm long (or even longer).

They are crowned with the remains of five calyx lobes and turn green to yellowish when ripe.

The fruit of Rhodamnia rubescens (scrub turpentine) is plump and glossy black when ripe while Rhodomyrtus psidioides (native guava) is yellowish or greenish-yellow.

Both types of fruit (berries) are soft to the touch (squishy) when mature and should come away from the branch very easily when pulled.

Sometimes these fruits are collected by placing a gauze bag around a fruiting branch and letting the fruit drop into the bag when it’s ripe.

The seed should be removed from the pulp as soon as possible after collecting the fruit.

Contact sosmyrtlerust@rbgsyd.nsw.gov.au if you have either of these plants on your property.