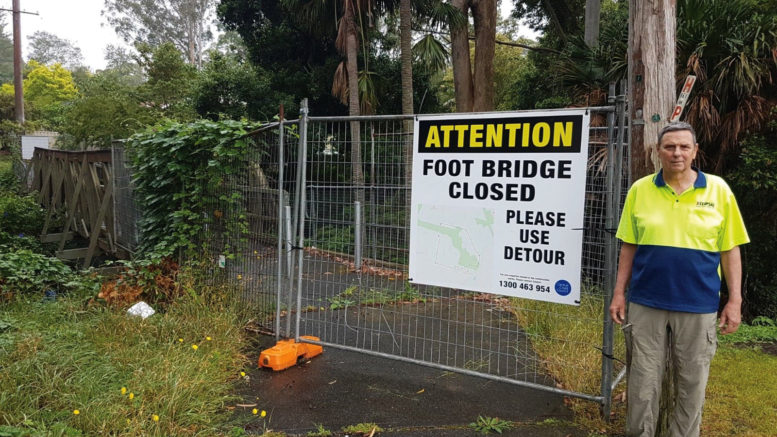 Narara resident, Bruce McRae, is concerned for children’s safety after a footbridge between Hanlan St North and Hanlan St South was closed by Council, forcing people to now walk a long detour.

This detour takes pedestrians out along Pearson St, and onto the main road of Narara Valley Dr, which McRae said is an extra 1km on top of the normal route.

“The thing I am really concerned about is school children going to Narara Valley High School who walk from Hanlan St North to Hanlan St South,” McRae said.

“They have these pedestrian signs pointing all the way around just to get across a bridge.

“For anyone who wants to do that it adds 1km for anyone wanting to go to school.”

McRae said when the bridge was inspected four to six weeks ago, the engineer told the person who lived next door that a replacement of the bridge would not be happening anytime soon and they may have to wait until they join the two roads.

“I think it is just not good enough to say ‘oh well, we might just replace it someday’,” he said.

“We have been living here for 45 years, and the two roads have still not been connected.

“I just think, why can’t they just make another footbridge so people can walk across, especially school children.”

A Central Coast Council spokesperson said a timeframe for replacement of the bridge is not known,

“Council has had to temporarily close the footbridge due to urgent safety concerns.,” the spokesperson said.

“We know this is a popular route that our community takes, and we are looking to build a new footbridge to replace it as soon as possible, but a timeframe on this is not yet known.

McRae said he is also concerned about not having access to the footbridge when there is a flood.

“Because Hanlan St does flood, and Deane St also floods, sometimes the only way everyone can get in and out is via that foot bridge; if not everyone is cut off,” he said.

“It is stupid to say they are not going to replace the footbridge when it has been there for over 40 years.”