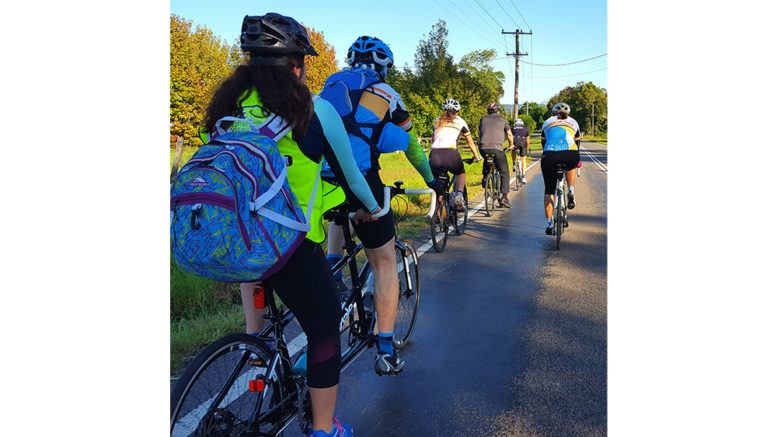 Cycling enthusiasts who need assistance are now able to jump back on a bike, with the Central Coast Bicycle User Group (CCBUG) re-starting its tandem RidesAssist program.

The program offers tandem rides to those living with a disability so they can still experience the joy of cycling and gain the benefits of exercise.

CCBUG President, Alan Corvy, said the program stopped in March due to the social distancing concerns, but he now feels confident they can resume because of low transmission rates.

“With COVID we could not guarantee the 1.5m social distance between people on the tandem bikes, so we had to halt it for a while,” Corvy said.

“But now the transmission rates are low, we can re-introduce the program with safety guidelines.

“If our pilots are feeling unwell, they are encouraged to stay home, and we will also be encouraging pilots to wear masks.”

Corvy started the RidesAssist program in 2017 after his friend had an accident leaving him unable to ride alone.

“He was around 70 and was a really strong rider, but he was told he was not able to ride a bike anymore because his vision was not strong enough,” Covy said.

“So, I thought, he is a strong rider, but he cannot ride on his own, what happens if we had a tandem bike which he could ride on the back of?

“We received a State Government and Council grant, as part of a Stronger Community grant, when the Council was merging, which enabled us to buy two tandem bikes to start the program.

“By the time that happened, my friend moved out of the area meaning he didn’t get a chance to ride on the back of the tandem.

“But since then, we have found quite a few people living with a disability, mostly blind people, who come riding with us.

“More recently, we had a man with Parkinson’s disease start riding with us because he can’t ride on his own.

“He used to ride a bike by himself, and he really enjoyed it, but he has now started with us.

“We take these people out for rides on the back on the tandem, and all they have to do is pedal.

“We do all the guiding, so it is safe.

“We also try to integrate this group with the rest of our able bodied riders, so we get to hear their stories on how they are coping with life, and they get to interact with people they may not usually interact with.”

Each tandem bike is “piloted” by an experienced rider, with the “stoker” being on the back.