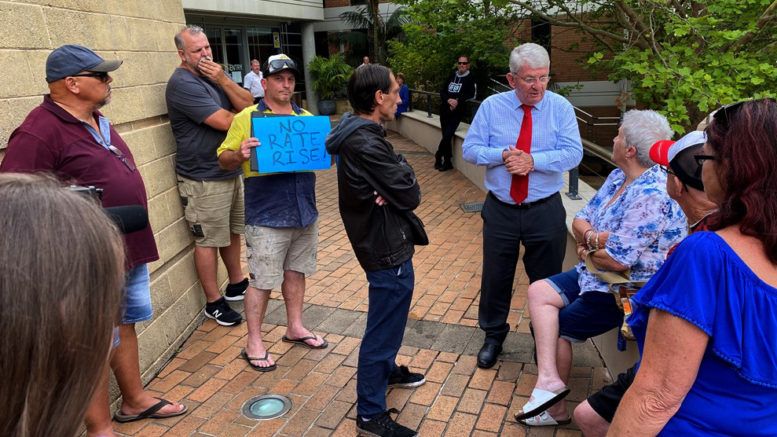 About two dozen people outside Wyong Chambers protesting about a rate rise were the first to hear the news, and it wasn’t good, that the proposed rate rise of 10 percent signalled in November has now risen to a proposed 15 percent.

Administrator, Dick Persson, shared the news with the protesters before he went inside the Chamber to officially announce that Council would, indeed, write to the Independent Regulatory and Pricing Tribunal (IPART) asking for permission for an increase of 13 percent plus another two percent for inflation.

Harmonisation of the rates between the two former council areas would result in the former Gosford area paying about $7 a week more, while the former Wyong areas would pay about $3 a week less than they are paying now.

These are average payments.

Persson said further work had been done forecasting the reduction in the levels of service to achieve sustainable long term financial plans and repay the restricted reserves debt.

“As a result, it is now apparent that a larger increase needs to be considered in order to maintain a similar level of service,” he said.

The increase, if granted, would be permanent.

“In considering a possible rate variation, I have looked at the rate levels for neighbouring councils,” Persson said.

“It is clear from this information that residential ratepayers on the Central Coast pay less in rates than neighbouring councils of Lake Macquarie, Newcastle and Cessnock, all of whom currently have special rate variations applying.”

Persson said COVID-19 resulted in a loss of income to Council.

“I also note that during Council’s response to COVID-19, steps were taken to protect permanent employees through a program of redeployment,” he said.

“I also understand that various fee waivers and reductions were applied during this period for the purpose of assisting and protecting local businesses and community organisations.”

Council to take out low cost loans for infrastructure